A lot of guys know the struggle of trying to build bigger calves and never seeing noticeable gains. That’s because many men “suffer” from ‘high calves,’ which means they have a long Achilles (the tendon that connects the heel to the back of the leg) and small muscle bellies. Basically, this means the calf muscle is naturally shorter and a lot less likely to grow into that boulder.

But less likely does not mean impossible, according to former high-calf sufferer BJ Gaddour, C.S.C.S., owner of digital workout platform The Daily BJ. After seeing his social media followers constantly nit-picking of his toothpick lower legs, the magazine cover guy got seriously diligent about his calf strategy—and now his lower legs are the objects of envy.

Related: The Hard Gainer’s Guide To Packing On Size

“Guys tend to make three big mistakes when they’re trying to beef up their lower leg muscles,” Gaddour says. But fear not, high-calvers, you can fix these common blunders by adding Gaddour’s calf-building workout to your routine.

Mistake #1: Thinking Running Will Do The Trick

Our calves have become conditioned for the endurance to do basic things, like standing, running, and walking. “The calves are stubborn, strong muscles that have a lot of stamina, so they need to be shocked into growth,” Gaddour says. So, just doing more of the same thing won’t make them bigger. (Check out the workout below to get yours growing.)

Mistake #2: Saving Calf Exercises For The End Of Your Workout

Far too many of us quickly tack on a few calf raises to the end of leg day—and by doing so we sabotage our calves’ potential. “The movements you do first in your workout are the ones you’ll get the most out of,” says Gaddour. Even if you don’t have a ton of time to dedicate to training your calves (and most people don’t), hitting them hard early in your workout will produce better results because your body is fresh and not fatigued, he says.

“If you want to basically guarantee growth in any muscle, you need to increase the amount of time it’s under tension,” says Gaddour. So if you’re flying through reps, your muscles may burn, but they’re not getting the maximum stimulus they need to get bigger. Gaddour advises performing reps methodically, and sometimes even slowly, lingering at different phases in the exercise in order to build evenly-distributed strength and muscle.

Follow this mini-calf workout from Gaddour to avoid these physique-sculpting faux pas and maximize your results. Perform the exercises at the beginning of your workout at least two to three times a week. 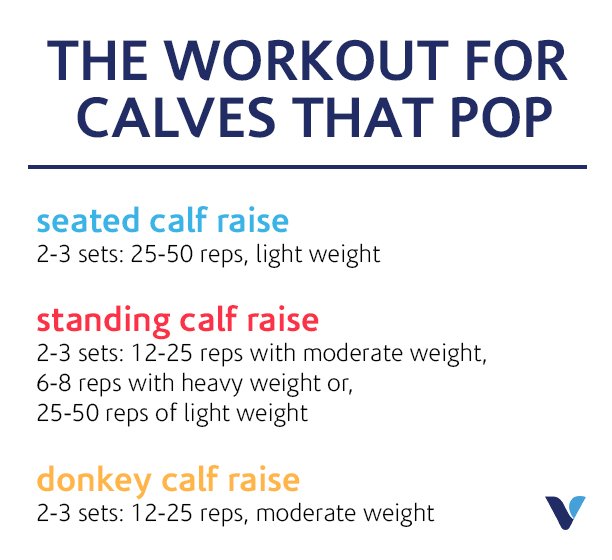 Make sure your form is on-point and you’re maxing out your gain potential:

This exercise zeros in on the Soleus, which is the large muscle in the lower calf. This portion of the lower leg is largely composed of endurance-focused fibers that respond well to high reps and short rest periods, according to Gaddour—which is why he recommends performing two to three light sets of 25 to 50 reps.

How to do it: Sit in a seated calf raise machine or sit on a bench with a weight plate in your lap. Your feet should be firmly planted on the floor and your torso should be upright. Pushing through your toes, use your lower leg muscles to lift your thighs upwards towards the ceiling. Pause at the top and then reverse the movement to return to the starting position. That’s one rep.

This move, on the other hand, targets the Gastrocnemius, which is the upper calf muscle. Since this muscle is comprised more of fast-twitch muscle fibers—meaning it’s primed for explosive movements or heavy loads—performing moderately-weighted sets of 12 to 25 reps will help promote growth, says Gaddour. However, he adds, this portion of the muscle also responds to heavier loads of six to eight reps, as well as burn-outs of light weight high reps—so feel free to mix up your approach from workout to workout.

How to do it: Stand tall with the balls of your feet on a platform a few inches off of the ground (the base of a squat rack or a step works perfectly) and your heels hanging off the back. Using your lower leg muscles, press through your toes to elevate your body. Pause at the top and then reverse the movement to return to the starting position.

Donkey raises take the traditional standing calf raise and turn it on its head—almost. By hinging at the hips, you transfer the bulk of your weight forward, which stretches the gastrocnemius muscle while you work it, says Gaddour. This can help promote even more calf-building power by introducing a new stimulus to these stubborn muscles. Perform two to three sets of 12 to 25 reps to start, and increase your reps as your legs become more adjusted to the movement.

How to do it: Stand on a low step or a platform a few inches off of the ground in front of a bench or a box. Instead of standing tall, hinge at the hips (keeping your legs straight) until your arms rest on the top of the bench or box. Lift and lower your heels as you would in the standing calf raise.