Ever wonder why some people bruise like a peach, while others seem to never get any black-and-blue marks? We asked the experts to break down the common causes of constant bruising—and which warrant a trip to the doctor.

What we call a bruise, doctors call a ‘contusion,’ says Michael Grosso, M.D., Chief Medical Officer of Huntington Hospital in New York. “Generally, contusions are caused by traumatic injury to the skin,” he explains. Everything from getting hit with a baseball to bumping into something can do the job.

The aftermath of trauma that occurs beneath the skin causes the dark discoloration we know as a bruise. “When you bruise, blood vessels have broken,” says Arielle Levitan, M.D., author of The Vitamin Solution. Their contents (blood and its byproducts) leak out and show up as purplish discoloration on the surface of the skin.

When blood vessels first break, red blood cells release hemoglobin—the stuff that carries oxygen around the body, says Grosso. Hemoglobin, which has a red pigment, then breaks down to other pigments. “Bruises can be a number of colors—red, purple, brown, green, yellow—depending on the stage they’re in.” Eventually the body sweeps those pigments away in the bloodstream.

When Is Bruising Serious?

Most bruising isn’t anything to worry about. Aside from not walking into things, the best ways to prevent it are to avoid blood-thinning over-the-counter medicines and take a daily multivitamin, says Levitan. (We’ll explain why soon.)

However, “if you feel you’re bruising or bleeding more frequently without obvious provocation, see a doctor,” she says. When bruises appear without any explanation, one of these health-related issues could be to blame.

“The most common factors that predispose people to easy bruising and bleeding are overuse of ibuprofen or aspirin,” says Levitan. Nonsteroidal anti-inflammatory drugs (NSAIDs), like aspirin and ibuprofen, are meant to be used short-term—three days or less for fever, and 10 days or less for pain. When you use them more often, they may affect your blood’s ability to clot, making it harder for your body to stop internal or external bleeding.

Since prescription blood thinners, like warfarin (commonly used to treat blood clots in people with heart issues), have a similar effect, they also put you at greater risk for bruising.

2. You Have a Vitamin Deficiency

Yet another reason to eat a healthy, balanced diet and take your daily multi, certain vitamin deficiencies contribute to easy bruising.

One of the most common: vitamin C deficiency. “The body cannot make vitamin C, or ascorbic acid, but needs the nutrient in small amounts,” says Grosso. In fact, vitamin C is a building block of blood vessels; without it, they’re more fragile and you’re more likely to bruise and bleed.

Though vitamin C deficiency is uncommon, insufficiency can occur in otherwise healthy folks who don’t eat a variety of fruits and vegetables—especially citrus fruits and peppers.

Related: 6 Nutritional Deficiencies That Can Cause Hair Loss

Since vitamin D, vitamin B1 (a.k.a. thiamine), and vitamin E play important roles in skin repair, low levels of any of those vitamins can also lead to increased bruising—or longer-lasting bruises, adds Levitan.

3. You Have Fair Skin

Luckily, pale people aren’t predisposed to any health issues that actually cause more bruising. However, “the discoloration is more easily seen on fair-skinned people (like blondes and redheads), so they seem to bruise more easily,” says Grosso.

No matter what your skin type is, understand your own health history and talk to your doc if you start noticing bruising more often without any obvious cause.

4. Your Skin Has Sun Damage

One sunburn won’t make you more likely to bruise. However, sun damage caused by years of overexposure to the sun’s UV rays—which also leads to wrinkles, dark spots, and premature signs of aging—can.

If your skin is showing other signs of UV damage, look out for changes in bruising that may come along with them. In older people, this can manifest as a specific type of bruising, known as “actinic purpura” or “senile purpura.” You might have seen it in purple-y patches on your grandparents’ forearms or the backs of their hands.

5. You Have A Blood Disorder

Since bruising is directly related to how your blood functions, “certain blood disorders—especially deficiencies in clotting factors—can certainly cause it,” says Grosso.

“The classic example: hemophilia, in which a genetic problem affects our blood’s ability to produce something called Factor VIII,” he says. (Factor VIII is a blood protein involved in clotting.) People with Factor VIII deficiency may experience prolonged bleeding when cut, develop spontaneous bleeding in their joints, and, of course, bruise easily.

Von Willebrand Disease, a genetic condition marked by a missing or defective blood-clotting protein, can also cause easy bruising.

6. Your Blood Platelet Count Is Low

Platelets, the tiny blood cells required to form clots, are your body’s first defense against bleeding.

“If your platelets don’t function properly, your system won’t stop bleeding as easily as it would normally,” says Levitan. (Platelet function issues can be caused by taking lots of aspirin or underlying health issues, like the autoimmune condition idiopathic thrombocytopenic purpura or even leukemia.)

“Liver and kidney diseases, which tend to make platelets less functional and deplete the body of other factors involved in coagulation, can also cause easy bruising,” she says.

Unfortunately, bruising more easily as we age is also just a general fact of life.

“The elderly tend to bruise more easily because our skin becomes more delicate as we age,” says Grosso. As the outer layer of our skin—and the blood vessels below—thin, our tissues grow more fragile and susceptible to bruising. (Thanks a lot, collagen loss!)

Pin this infographic for future reference: 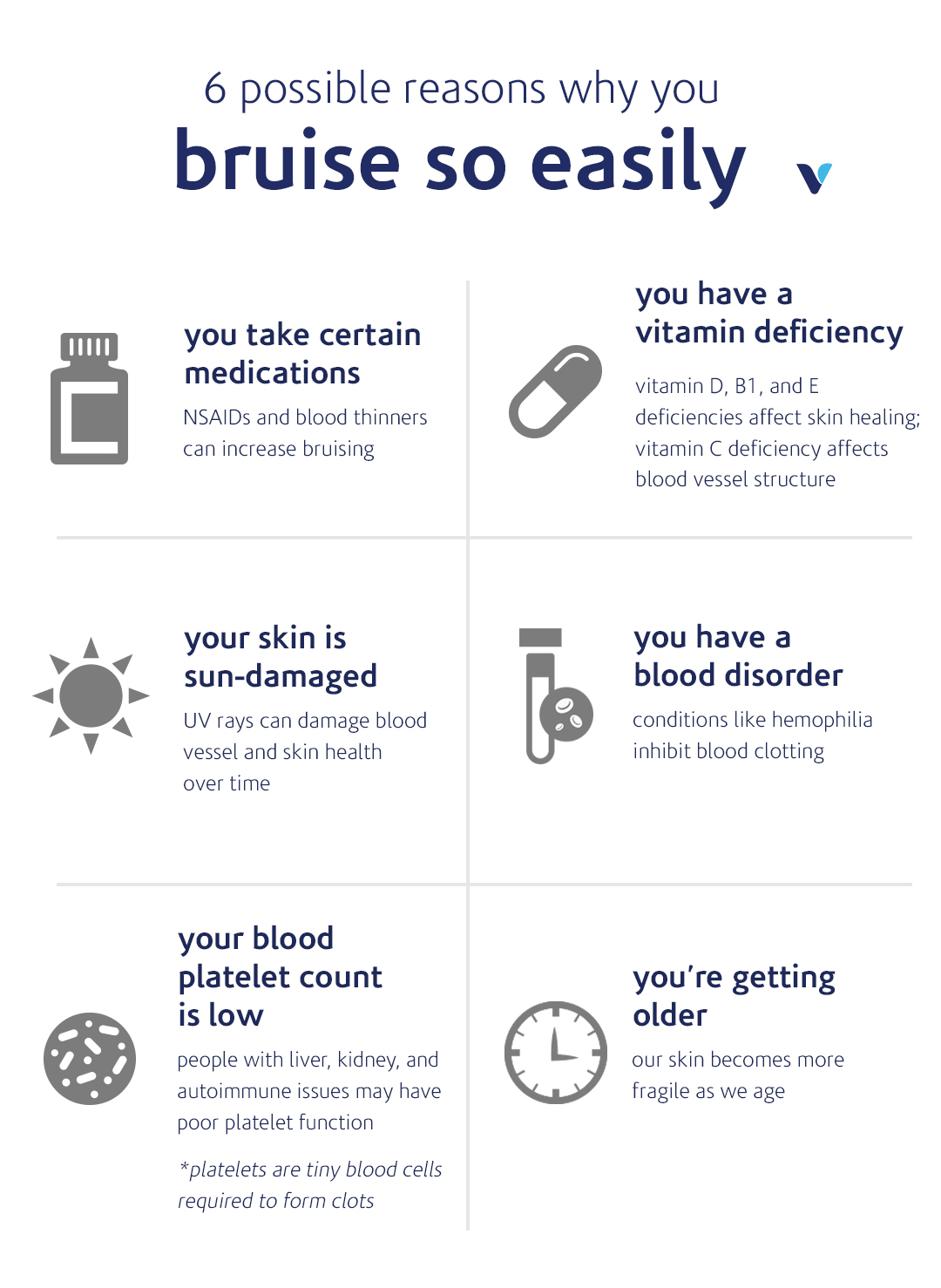