Ever since doing my first Whole30 three years ago, coconut oil has become a permanent fixture in my pantry. Because the versatile oil has a high smoke point, I can whip up homemade sweet potato fries at home without setting off the fire alarm. Plus, its pleasant scent compliments everything from eggs to zucchini noodles. Until recently, though, I had never thought about using it as part of my beauty routine.

When it comes to body and beauty, one of coconut oil’s biggest claims to fame is the fact that it’s super-moisturizing. It’s rich in fatty acids like lauric acid, capric acid, and caprylic acid, and because of its chemical makeup, gets absorbed by hair much easier than other oils. It’s also packed with the antioxidant vitamin E.

Plus, honestly, who doesn’t want to smell like a tropical island?

Putting Coconut Oil To The Test

I spent a few weeks testing out the many body-care and beauty uses for coconut oil. Here’s what dazzled me—and a few that fell flat.

In the ancient technique of oil pulling, you swish a teaspoon of coconut oil around in your mouth for 20 minutes first thing in the morning to improve your breath, promote oral health, and draw out toxins. (There aren’t a lot of studies to back this up, but man is it popular.)

At first, the coconut oil was delicious. Minutes later, it wasn’t. I’m no quitter, but I’ve gotta be honest: I didn’t make it past minute seven of swishing.

After throwing in the towel and spitting out the oil, my mouth still felt, well, kind of oily. I did a breath check to see if I could smell any difference, and didn’t notice anything good or bad, which I guess I’d count as a win?

Related: I Tried Oil Pulling For Two Weeks—Here’s What It’s Like

Ultimately, oil pulling felt like a lot of effort for not much reward, so I think I’ll stick with traditional mouthwash.

An early adopter of those razors with the built-in shaving cream, I’d never thought twice about my convenient routine—until I tried using coconut oil as shaving cream instead. 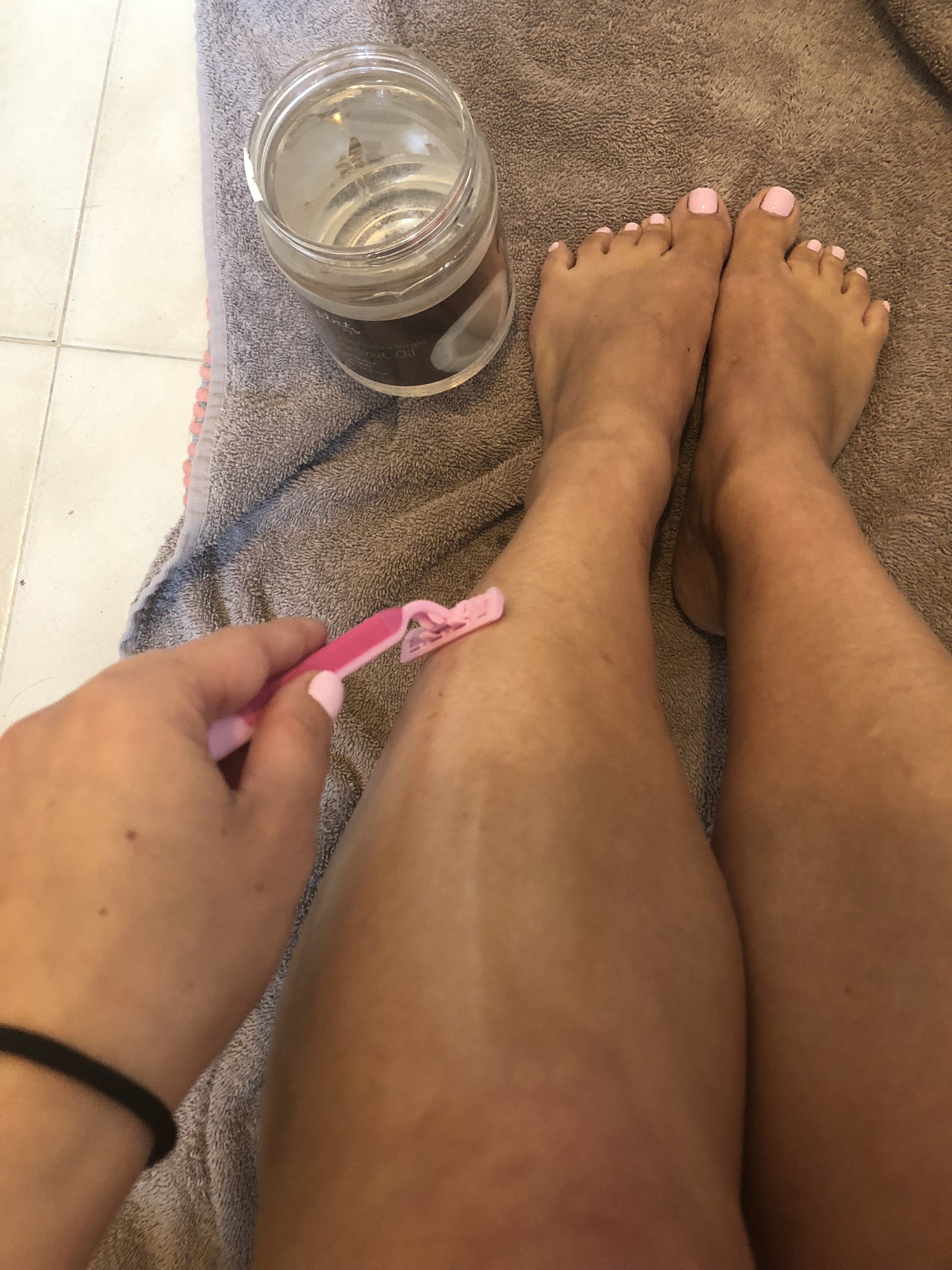 Granted, applying the coconut oil added another step to the process (and made my shower super-slippery), but there was no denying that I not only got a closer shave, but sported silkier legs than usual, too.

I’ll still turn to my built-in shaving cream razors when in a rush or feeling lazy, but I’ll definitely whip out my jar of coconut oil when I want a quality shave.

3. Deep Condition With Coconut Oil At Your Own Risk

My hair is on the thinner side, slightly wavy, and a little oily, so I was hesitant to use coconut oil as a deep conditioning treatment. Trendy as it is, I figured it would be too much for my hair to handle. And my fears turned out to be warranted.

After showering one night, I rubbed a tablespoon of oil into my scalp and through the ends of my hair, put on a shower cap, and went to bed so the oil could condition my hair overnight. The next morning, no matter how many times I shampooed, I just couldn’t get all of the oil out! My hair looked noticeably greasy, and felt heavy and weighed-down. It took a few days-worth of showers to get it back to normal.

The ends of my hair ultimately did feel softer and more moisturized, though! In retrospect, I’d skip the scalp portion of the coconut oil conditioning and just add a little bit to my dry ends.

The makeup remover I swear by is oil-based and unreasonably expensive—around $28 for a bottle. So when I saw that coconut oil can be used to remove makeup, I was pretty excited to give it a try.

After dabbing a little bit of coconut oil on the end of a cotton swab, I swiped it across my liquid-lined eyelids, and the entire layer of jet black came right off! 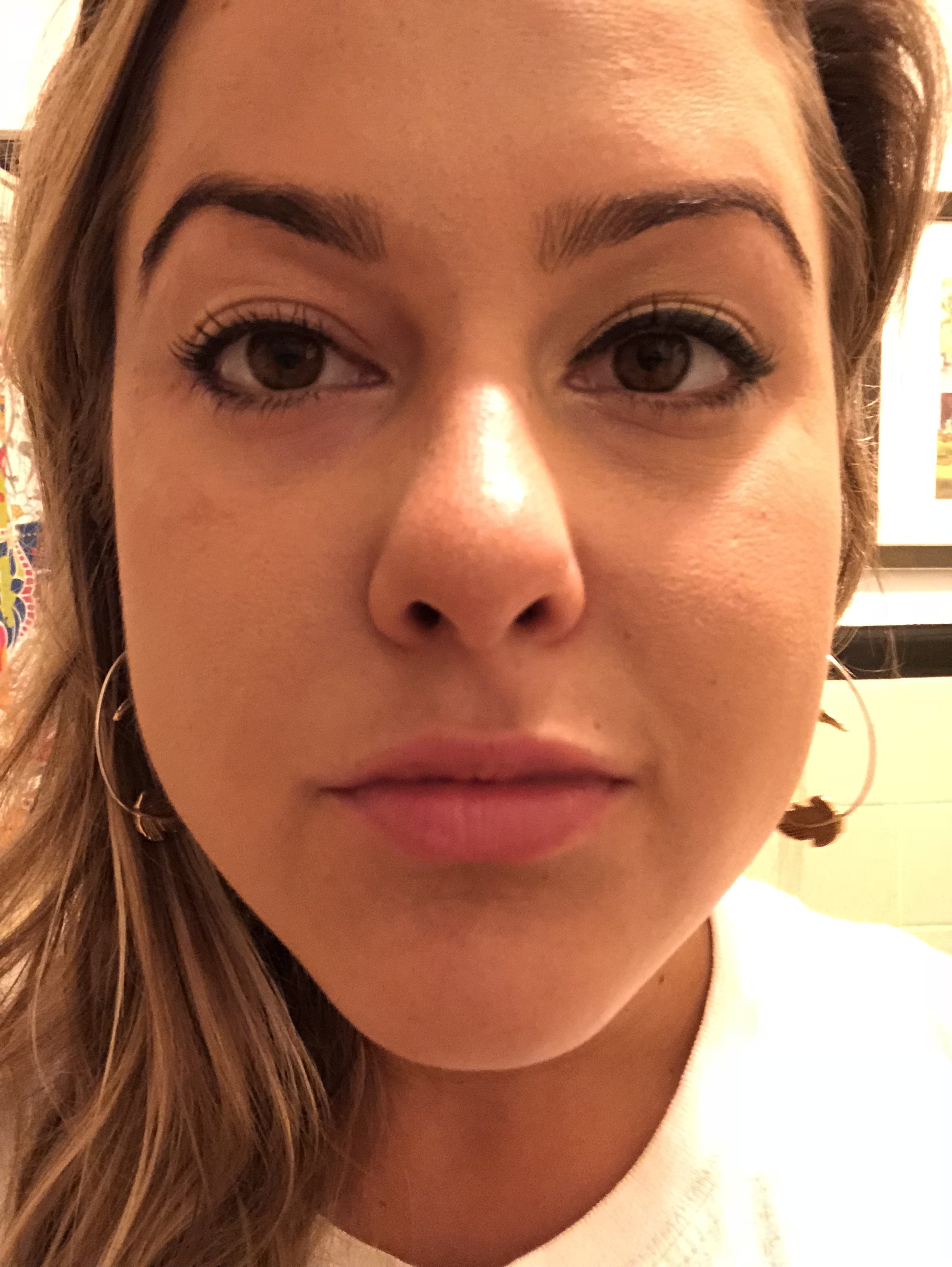 Not to mention, my skin felt moisturized and the coconut oil made my lashes look more conditioned. I’ll definitely keep using this one!

5. Coconut Oil Is A Power-Moisturizer For The Body

Admittedly, I’m guilty of moisturizing my body with whatever drugstore brand product happens to be on sale. Not surprisingly, my lack of discrimination doesn’t always play out effectively.

Knowing how intensely moisturizing coconut oil is, I decided to capitalize on its potential benefits for my neglected skin. After showering one morning, I rubbed a dime-sized amount all over my arms and legs—and I could really feel the difference! My skin (especially my elbows, which are usually extra dry) felt super-hydrated. (Though my skin did feel a little oily for the first few hours.)

Given my moisturizing habits, I don’t expect to oil myself up every day. But since moisturizing with coconut oil even just once made my skin feel so luscious, I’ll probably make it a once-a-week thing.

A friend of mine had recently broken one of her favorite makeup palettes (a matte-pressed face powder), so after reading that coconut oil could remedy the shattered powder and basically glue it back together, I decided to play surgeon. 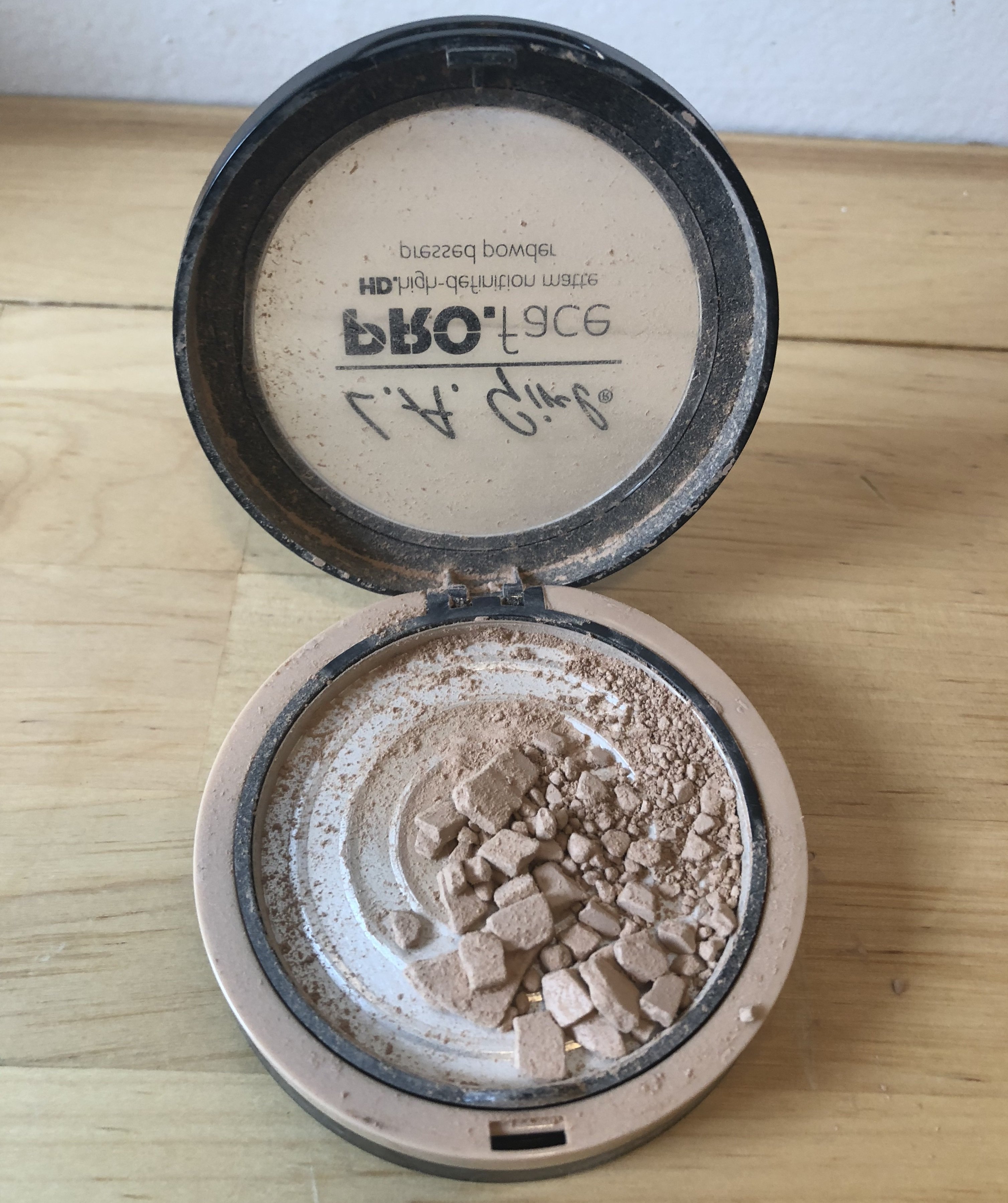 I dripped a quarter-sized amount of coconut oil into the broken palette and slowly mashed the pieces of pressed powder into the oil until an even mixture formed. I think I used too much oil for how much powder was left in the compact, though, because the end result looked incredible wet. 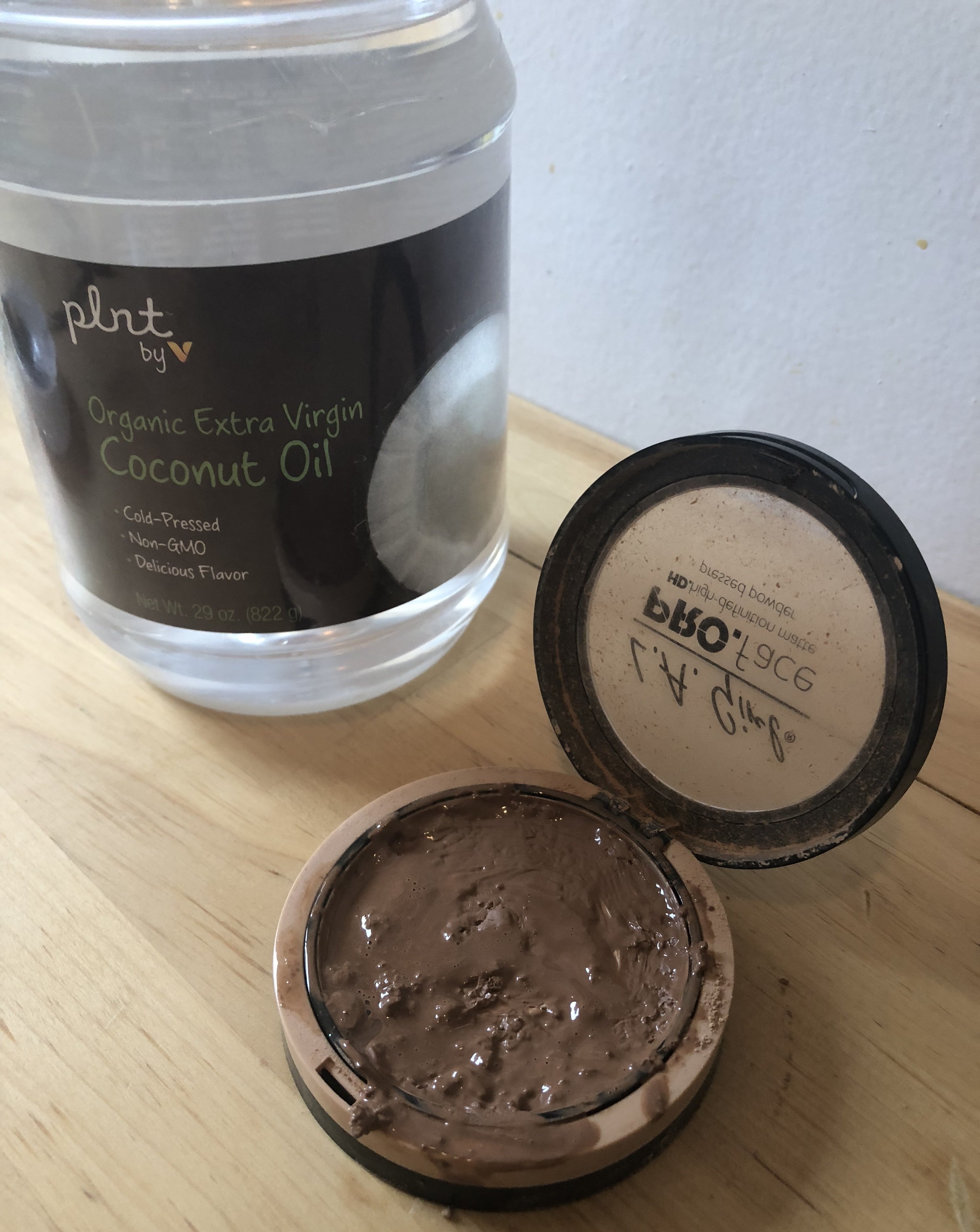 If I had used just a little bit less, it might have worked, so I’ll give it another shot if ever needed.

DIY beauty bloggers all seem to rave about simple exfoliating body scrubs made from equal parts coconut oil and granulated sugar. Given that my go-to store-bought scrub clocks in at around $30, I was eager to try a homemade alternative.

Since I didn’t have any granulated sugar, I used sea salt as a substitute—and it worked incredibly well. The scrub was effective but not too harsh, and the coconut oil left my skin super-moisturized. It looked head-to-toe smoother and healthier (not to mention I smelled delicious). I’ll definitely be making batches of this to save some cash!

8. Coconut Oil: An A+ Brow Enhancer

I’ve never had unruly brows or invested in one of those pricey brow wands, but I do get the occasional stray and love the bold brows so many women are rocking right now. 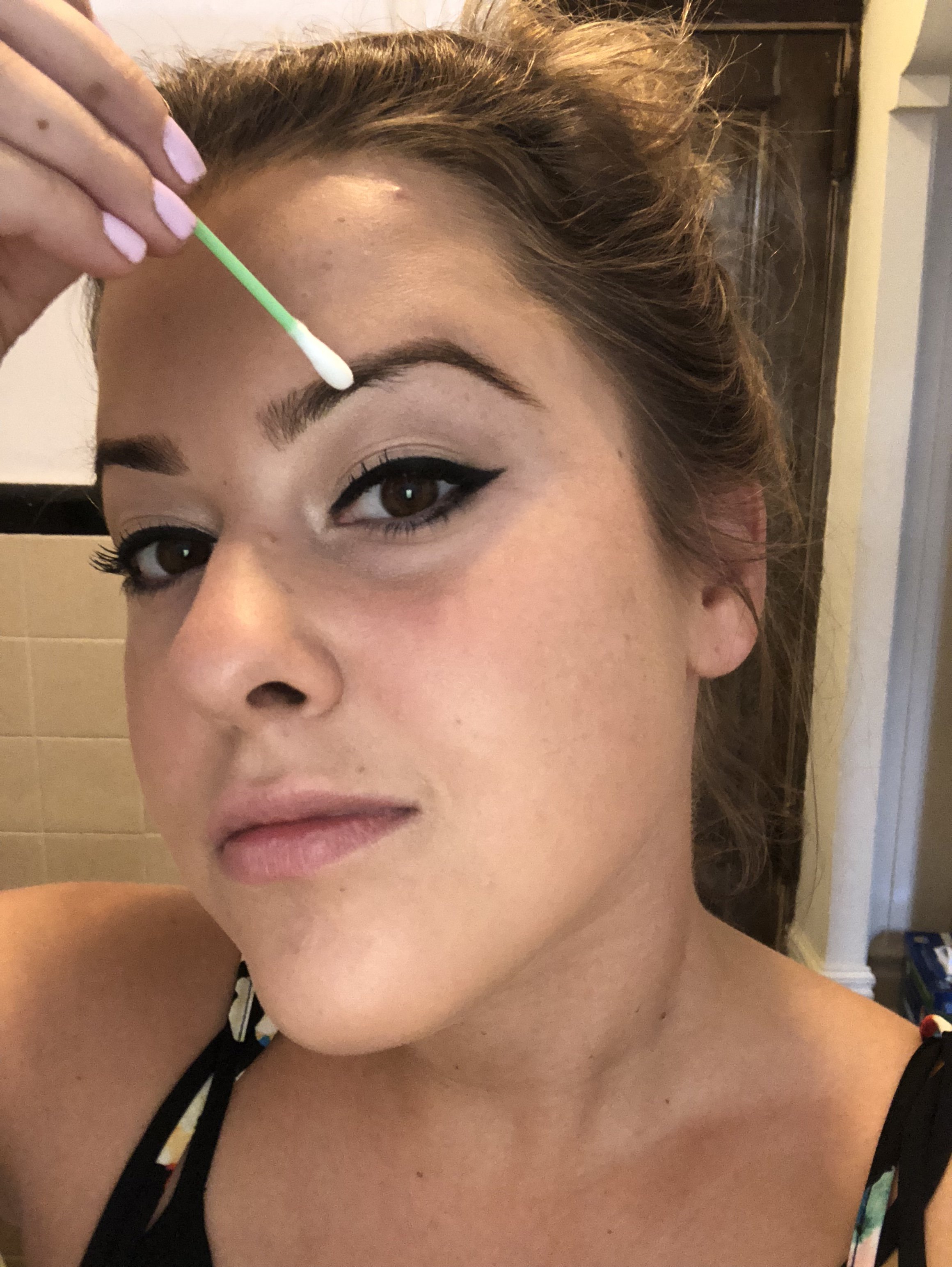 I read that coconut oil could come in handy in the brow department, too, so I applied a dab of it to the end of a cotton swab and smoothed it over my brows before heading out for the day. Not only were they free from fly-aways, but they stayed perfectly shaped all day long!

My last beauty experiment was to swap coconut oil in for my usual lip balm (SUGAR by Fresh). After rubbing it on just about every other part of my body, I had a feeling I’d like how coconut oil felt as a lip balm—and I was right! My lips felt instantly moisturized and the oil tasted great. My only qualm: It’s much easier to carry a tube of lip balm around than a giant jar of coconut oil…

After using it pretty much everywhere on my body, I can confirm that coconut oil is just as versatile and hydrating as people make it out to be. I’ll definitely continue using it in a few parts of my routine:

While I wasn’t a fan of oil pulling or deep conditioning with coconut oil, I’d still definitely recommend giving them a try before writing them off—especially if you hate the burn of conventional mouthwash or have a different hair texture than I do.

Which explosive movement are you going for? 🔥

Pour yourself one of these Watermelon Wave Mock-A-