I used to be an adventurer, a traveler, an athlete, an occupational therapist, and a Pilates instructor. But suddenly, when I got sick with Lyme disease four years ago, I was thrust into a new role: I became The Patient. 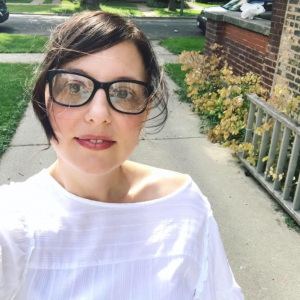 Lyme disease is an insidious illness: There was no thunderclap, dark cloud, or bolt of lightning marking the day I contracted this disease. I assume I was doing regular, teenage activities, like hiking the bluffs of my rural hometown in Minnesota, camping, or swimming along the banks of the Mississippi River. But my assumption is just that: an assumption.

I wonder: At what point did the Lyme disease begin chipping away at my immune system and calculating the day it would hit me?

My body began to break down bit by bit. First, I was dealing with a series of large ovarian cysts, followed by the surgery to remove them. Next came the onset of interstitial cystitis—a painful, inflammatory bladder condition marked by urinary urgency and frequency. I held fast to the belief that this situation was temporary, and I soldiered on through sleepless nights and continuous pain for four years.

Then, I began to experience constant vertigo, insomnia that landed me in the emergency room, debilitating fatigue, weight loss, digestive issues, and pain in my brain and spinal cord. My longtime general practitioner could see my health was failing, but she was baffled as to how to help me. I saw one doctor after another, but despite consulting with some of the best physicians, they could do little more than speculate out loud about what was going on with my health:

You’re in between vertigo episodes right now. We’ll catch it the next time!

Maybe an old Epstein-Barr virus has been reactivated?

You’re having silent migraines without a headache.

You need to stop eating so many raw vegetables; they’re giving you gas and causing your stomach pain.

You have an unfortunate case of severe chronic fatigue syndrome, fibromyalgia, and multiple chemical sensitivities. It’s one of the worst cases I’ve ever seen!

I went with the latter set of diagnoses: Severe chronic fatigue syndrome, fibromyalgia, and multiple chemical sensitivities seemed to encompass many of my ongoing health challenges.

In 2012, the doctor gave me a round of steroids to treat my chief complaint: exhaustion. Unfortunately, the medication caused me to tank and land flat on my back in bed; the fatigue was crippling. New symptoms emerged—I couldn’t sleep, sit up, tolerate sound or light, and my brain and spinal cord burned with a ruthless intensity. Eventually, the sound sensitivity escalated to the point where I could no longer talk on the phone–not even to my mother (who lived far away, and who I wanted to talk to!). For months, I lay in a dark, silent room, hoping the symptoms would fade away. But I was wrong. I was 33 years old, and living in complete isolation.

At this point, I had nearly succumbed to the idea that I was unhelpable; this mysterious illness would claim my life, or—in an equally scary thought—it would become my entire life.

For months, I lay in a dark, silent room, hoping the symptoms would fade away. But I was wrong. I was 33 years old, and living in complete isolation.

With the encouragement of my family, I decided to visit one more doctor. I vividly remember the appointment: I was too weak to walk on my own, so my husband carried me through the doors of the doctor’s office. That’s when I got a new diagnosis.

Following a two-hour appointment to review my medical history, the doctor diagnosed me with Lyme disease despite two negative western blot tests (Western Blots were the first immunoblot developed to detect Lyme. An immunoblot is a laboratory test that looks for antibodies). That day, I learned that the testing for Lyme disease is not an exact science. In reality, studies have shown up to 50 percent of those infected with the illness will never test positive through traditional blood work or recall a tick bite.

To make matters worse, only about 50 percent of people develop the classic symptom (the all-telling bull’s-eye rash), leaving many clinicians with the difficult task of diagnosing Lyme disease based on clinical presentation.

After endless trial and error, I assembled a team of healthcare practitioners and began a grueling treatment program (sometimes swallowing up to 60 pills a day) that will continue until I’m well or until I can’t afford the burdensome out-of-pocket expenses any longer.

I’ve also used herbs, supplements, medication, diet and lifestyle changes, light therapy, detoxification, exercise, and many other therapies to strengthen my body and mind. While I’ve made some improvements, I deal with unremitting fatigue, insomnia, muscle and nerve pain, and flu-like symptoms on a day-to-day basis.

Treatments are demanding. In the simplest of terms, killing a high infectious load in the body creates a cascade of inflammation for a period of time. Often, I feel worse before I begin to feel better.

Related: It’s Time To Stop Being So Scared Of Meditation

So how do I cope with the constant barrage of symptoms? Some days I laugh. Some days I cry. Mostly, I’m a work in progress learning to listen to my body and respect what it has to tell me. Sometimes it tells me to rest. Sometimes it tells me to take a risk. When you live life with a chronic illness, every day can be a surprise, and you must always re-examine your body’s fluctuating energy reserves. Whatever the message, when I listen, my body always responds by moving me a step forward in my healing. These small victories fuel me to continue the long journey toward recovery.

When you live life with a chronic illness, every day can be a surprise, and you must always re-examine your body’s fluctuating energy reserves.

In addition, I’ve mindfully cultivated relationships, both in person and on social media, with individuals in the chronic illness community. I’ve teamed up with other Lyme patients to create an online support group for the state of Illinois, where I live, and I joined a fierce group of women for the Lyme Disease Challenge to raise international awareness about this emerging health crisis. We cheer each other on, and their support is essential to my recovery; it’s comforting to know I’m not alone in this longstanding fight.

After being diagnosed with Lyme disease, I remained fearful of nature for many years. These days, I have an overwhelming desire to reconnect with it, even if it’s on some paved trails. Being in nature is vital to my recovery. Although I live in an urban setting, there’s a nature preserve near my house, which allows me to walk and daydream (when I don’t feel super-fatigued) about my future ambitions. Though I continue to have physical limitations, the ability to walk, dream, and let my inner wanderlust free is a form of moving meditation for me.

And as an ex-gymnast and Pilates instructor, movement has always been an integral part of my life. For fitness, I incorporate gentle Pilates and yoga into my treatment protocol. In both of these mind-body exercises, the quality of the movement or pose is more important than the quantity of repetitions. 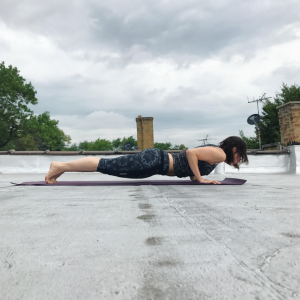 In yoga, I like the gentle stretch and spine twist of triangle pose. On days when I feel stronger, I like the physical challenges of crow and side crow, although I’m not very good at them yet. Of course, I love corpse pose, or savasana, as it’s very calming to my nervous system.

The breath work involved with these forms of exercise helps to reinvigorate my body and relieve stress and tension. Despite the fact that I am living a modified life due to waning strength and energy levels, I refuse to give up, and I use mind-body exercises to remind me that movement is life. As long as I am still moving and breathing, I am living.

Lyme disease has cost me a lot: my job, friends, financial stability, and the ability to start a family. Still, I remain mindful of the idea that just because a few chapters of my life ended, doesn’t mean the whole book closed. There are many unfinished chapters to my life story, and I’m writing them one page at a time.

Life may not always look the way I want it to look, but I’ve discovered a spirit of perseverance within me that constantly whispers in my ear, “Keep going. You can try again tomorrow.”

Alani Nu's Witch's Brew flavor is BACK, just in ti

Today is Family Health and Fitness Day! To celebra

Have you tried any of the four @C4Energy X @Starbu

Keep these tips in mind to make sure you're meetin

If this doesn't hold you accountable we're not sur