My two dogs would never cut it as certified therapy animals. They sneakily gobble petrified bacon off the concrete. They bark at other dogs. They chase kids on skateboards. They are too big for the subway and one of them—Violet—vomits anytime she’s in a car.

I love my dogs, but sometimes it seems they are just as dysfunctional as I am.

Despite their quirks, I find that my dogs—with their snuggles, heavy sighs, and slow and steady breathing—have helped me manage my raging anxiety disorder.

I was first diagnosed with Generalized Anxiety Disorder when I landed in a psychiatric hospital. I was exhausted, incoherent, and incapable of making choices. In the hospital, I was so paralyzed I needed to be ferried around and told what to do. I was also, for the first time, given a cocktail of drugs. Finally, I was handed over to the care of an outpatient therapist and psychiatrist, and started doing the hard work of healing and learning resiliency.

While I was building up my new support system, my partner and I decided to adopt a dog. We did some research, and a few months later we arranged to meet Parker at a PetCo in New Jersey. He was part of a group of dogs recently rescued from an over-crowded shelter in North Carolina. I immediately knew he was my dog.

Related: 5 Easy Ways To Add Meditation To Your Day

My partner wasn’t as taken with the twitchy, little black pit bull who refused to make eye contact. Parker’s foster mom, Lynn, told us he was a shy, weird pup with some anxiety but that he was incredibly lovable and sweet.

“An anxious dog,” I smiled as I sat on the floor. Parker shimmied up into my lap like it was safe land in the midst of a churning sea. We were a perfect fit. 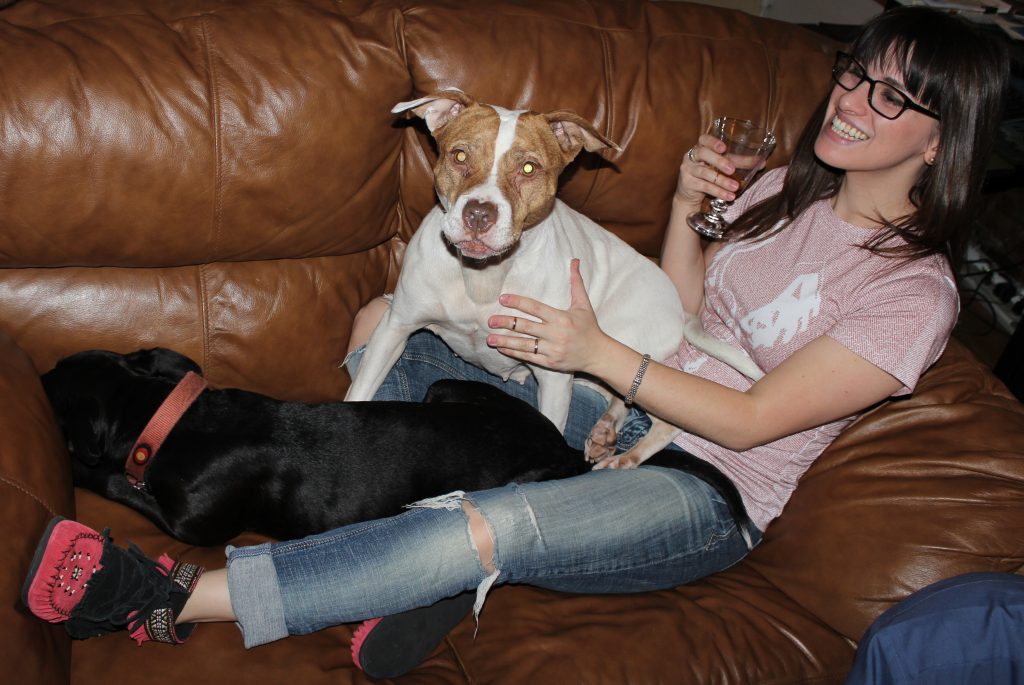 When we took Parker home the following week, it became evident right away that he’d been through some sort of trauma. Regular walks were scary for him; he would pancake and refuse to move. Sometimes he’d run and hide under parked cars. Often, he wouldn’t leave the safety of a doorway or stoop. He was hyper-vigilant, always scanning, always alert. Loud noises made him jump and flatten.

I was despondent. How did I think I could take care of a living thing when it was hard enough to take care of myself?”

We hired a trainer who showed us how using food, rewards, and positive reinforcement helped reassure an anxious dog. After working on basic commands over a few weeks, Parker seemed less terrified of our daily walks and began to enjoy them more.

I felt empowered that I was able to help Parker, even in small ways. He rewarded me by trotting around the apartment with a stuffed porcupine and throwing it up in the air, by snuggling in my dirty clothes, and by wedging his way in-between my partner and me in bed.

After a year, my partner and I decided to adopt a second dog. Violet had been abandoned soon after giving birth and was still lactating when we picked her up. Though she had a sassy and assertive personality (unlike Parker), she also showed signs of trauma. It took a while for her to warm up to us, but once she did, her sweetness and a penchant for snuggling emerged.

At this point in my own therapy, I was working on mindfulness techniques like breathing and centering my body. If I’m honest, I was failing miserably. Mindfulness unleashed all the obsessive thoughts in my brain, and they floated freely and torturously. Sitting still and focusing on my breath seemed like a Herculean task, and I began to hate meditating.

But holding Violet and focusing on her breath? I didn’t hate that.

Mornings are often difficult. I don’t typically wake peacefully. The minute I open my eyes, I am activated. My heart pounds even though there is no threat. So I often roll over and hug Violet, whose greatest skill is breathing heavily and evenly. We lie chest to chest—sometimes she’ll swat me in the face if she’s not interested—and eventually I regulate my breathing by syncing up with hers. This helps calms me and prepares me to face the challenges of the day.

On top of the breath work, taking the dogs for long walks also clears my mind. Playing with them encourages me to see joy in dark times. And when I can’t get out of bed, they happily stay in it with me.

Animals are healing creatures, and any animal can be therapeutic. I once knew a woman who got great comfort from her python. I have friends with hedgehogs, cats, rats, rabbits, and horses. My friends don’t all struggle with psychological issues, but they all report the psychological benefits of sharing their lives with animals.

According to a recent study written about in NPR, participants explained how “pets provided more than just emotional support and companionship…The animals also could distract them from their illness, even from severe psychosis.”

I love being around dogs so much that I eventually started volunteering at an animal shelter. Helping dogs with all sorts of special needs, quirks, and life experiences is challenging but rewarding, and I’ve learned that dogs are incredibly resilient and resourceful. They inspire me. Giving back to them when they have given me so much hope and comfort feels good and right.

My dogs are an important part of my life; not only are they my best friends, but they also play a significant role in helping me manage my anxiety. They help me feel capable. Dogs don’t judge; they don’t care if you struggle with mental illness—they only want to be involved in your life, even when you’re at your worst. And understanding that is incredibly healing.