I consider myself a fit, healthy, wannabe wellness goddess. I do CrossFit® five times a week, attend yoga class regularly, frequent local health food joints, and fire up a meditation app during my morning subway commute.

My morning ritual, though, is as far from @yoga_girl’s or Gabby Bernstein’s as it can be. It usually starts with me hitting ‘snooze’ five times followed by 10 minutes spent mindlessly scrolling through Instagram before I finally trudge over to the fridge and pour myself a mason jar-full of cold brew coffee.

Then I crawl right back into bed with my laptop to start some work before finally getting up, washing my face, making some breakfast, and heading to yoga.

Sure, it’s not like I’m eating a box of munchkins every morning, but in the era of A.M. meditation, gratitude journaling, turmeric lattes, and collagen smoothies, I often wonder if my morning ritual could be doing a little more for me. Enter apple cider vinegar (ACV), stage left.

Why Is Apple Cider Vinegar So Popular?

Pretty much the OG of at-home-remedies, apple cider vinegar is a favorite among health gurus, beauty fanatics, and wellness junkies, with many people swearing by a shot (or a few tablespoons) of the stuff first thing in the morning. That’s because of its purported ability to boost digestion, support a healthy weight, and amplify your glow from the inside out. Understandably so, considering ACV packs antioxidants, B vitamins, calcium, and potassium, and supports healthy gut bacteria. Research shows that it can boost heart and immune health, and even support healthy blood sugar.

Was this just the pungent punch-up my morning routine needed? I was about to find out. I bought myself a big ‘ole bottle of Bragg apple cider vinegar, imagining that with every sip of the pungent stuff I’d feel more invigorated, digest like the wind, and move one step closer to ‘Gabby Bernstein’ status.

I vowed to start each day for two weeks straight with apple cider vinegar to decide if it was for me—and the results were a bit surprising.

I Confirmed That No One Should Take Shots Of ACV

I played rugby in college, so I spent most of my time doing sprints, not shots. I never really liked the taste of alcohol, anyway, and as I became even more dedicated to fitness after graduation, I didn’t want drinking get in the way of my gains.

That said, as much I’d like to say that I waltzed into my kitchen on morning number-one and flawlessly threw back a shot of ACV, that’s not quite how it went. I poured a few teaspoons of ACV into a glass, but before I could even attempt to drink it the aggressive odor of vinegar practically punched me in the face. So, I totally chickened out, pinched my nose with my free hand, and spent the next five minutes taking baby sips of the stuff.

Once I finally got it all down, though, something magical happened: I felt instantly awake. (And, to get the eye-watering taste out of my mouth, I brushed my teeth before my morning cup of coffee for the first time ever.) 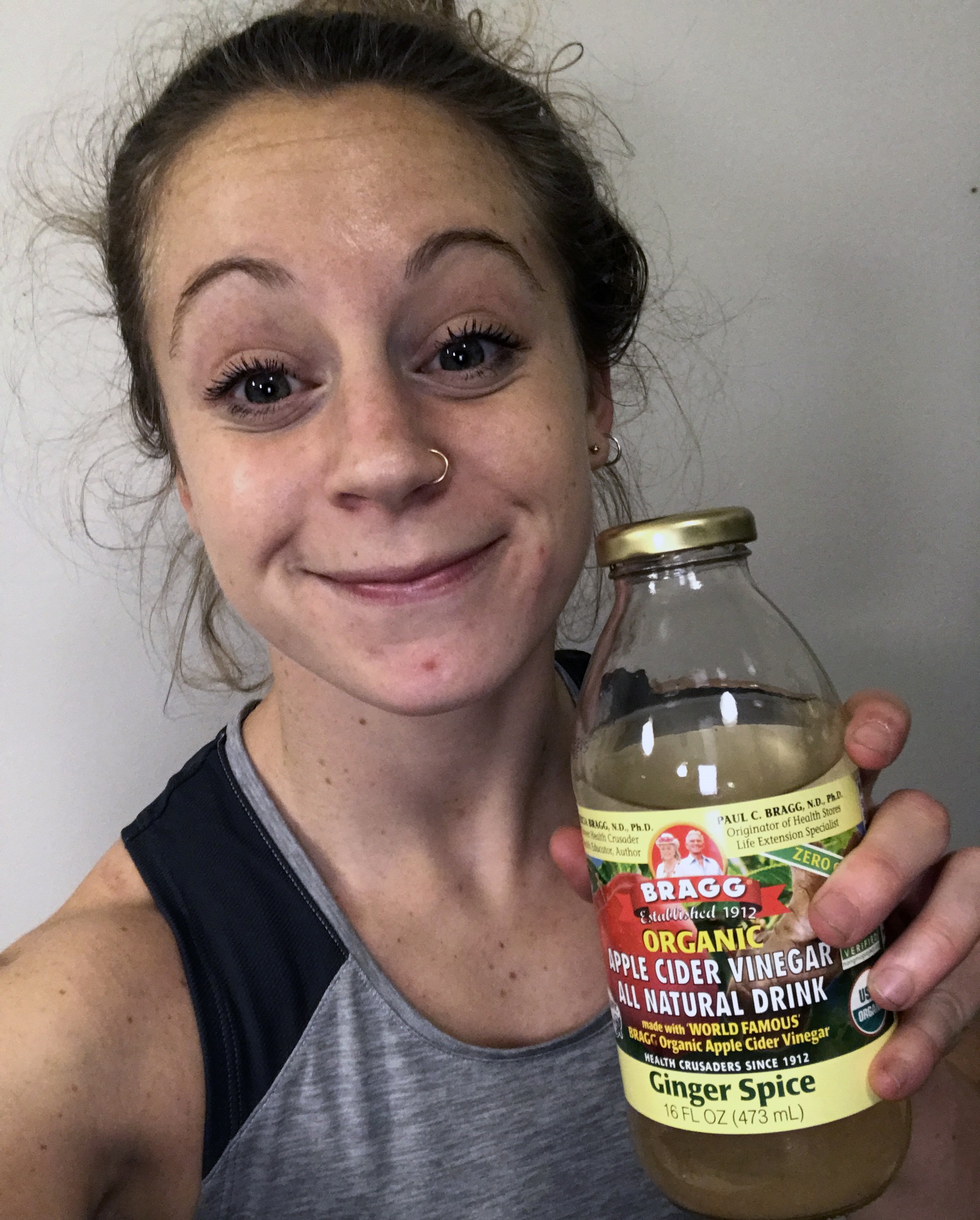 Since the whole shot thing clearly wasn’t going to work for me, I decided to dilute my ACV in water. (Lots of non-shot-takers mix their vinegar into water, tea, or seltzer—sometimes adding a little honey and fresh lemon to help the stuff go down easier.) For the remaining 13 days, I either poured two teaspoons of ACV into my water bottle and downed it bit by bit throughout the morning, or splurged on a Bragg’s ginger apple cider vinegar drink, which dilutes the ACV and balances it out with ginger spice and a bit of stevia. Toning down the kick of the vinegar made my new morning routine much more tolerable.

I Felt Healthy As A Horse

If I do say so myself, I have a quality immune system. I haven’t gotten sick—like ‘can’t get out of bed’ sick—in years. But I’d like to think that my morning apple cider vinegar, which I started sipping during the height of cold and flu season, helped keep my system strong and my body able to work out twice a day without feeling rundown.

Things Got A Little Stinky

By ‘things,’ I mean my bodily fluids. Within five hours of my first shot, I noticed my urine smelled a bit like asparagus. And when I hit the gym or got sweaty in yoga class, the smell that oozed from my armpits—and everywhere else that sweats—was equally off. The acidic stench (a potent combination of vinegar and feet) burned my nose. I barely let myself breathe while doing downward-facing dog and child’s pose. By day three, I learned to be extra generous with my deodorant before doing anything remotely active.

And look, I know a vagina isn’t supposed to smell like a field of daisies and that it’s normal to smell a little different depending on where you’re at in your cycle, what you ate, or how much you’re sweating—but when I started drinking ACV, boy did I notice a change. A little concerned, I called my gyno to fill her in on the situation. She said that introducing such an acidic food into my pretty consistent diet may have thrown off my pH, and that my vagina was likely adjusting to the change. Interestingly though, she also mentioned that since ACV is so acidic, it can help mitigate some bacteria overgrowth—a major vagina win. At the end of the two weeks, though, I was still a bit smelly, waiting for my body to adjust.

My Digestion Felt The Difference

My digestive system typically moves pretty quickly—or quickly enough that I poop three or four times a day. I’m a creature of habit and nosh on pretty much the same healthy eats every day: oatmeal for breakfast, salad with chicken for lunch, ground turkey with kale for dinner, an absurd amount of peanut butter for dessert, and two apples and a protein shake whenever I need a snack. I also faithfully take a probiotic every night before bed—so my system knows what’s up. But when I first added ACV to the equation, something weird happened: I couldn’t go. I spent the first two days sitting on the toilet willing my body to do its thing—but nothing.

Dr. Google told me that drinking an extra cup or two of water might help get things moving, so on day three I vowed to drink tons of water in hopes of easing what was now straight-up discomfort. Much to my relief, I went to the bathroom after yoga, then again after lunch, and then a third time right before CrossFit. 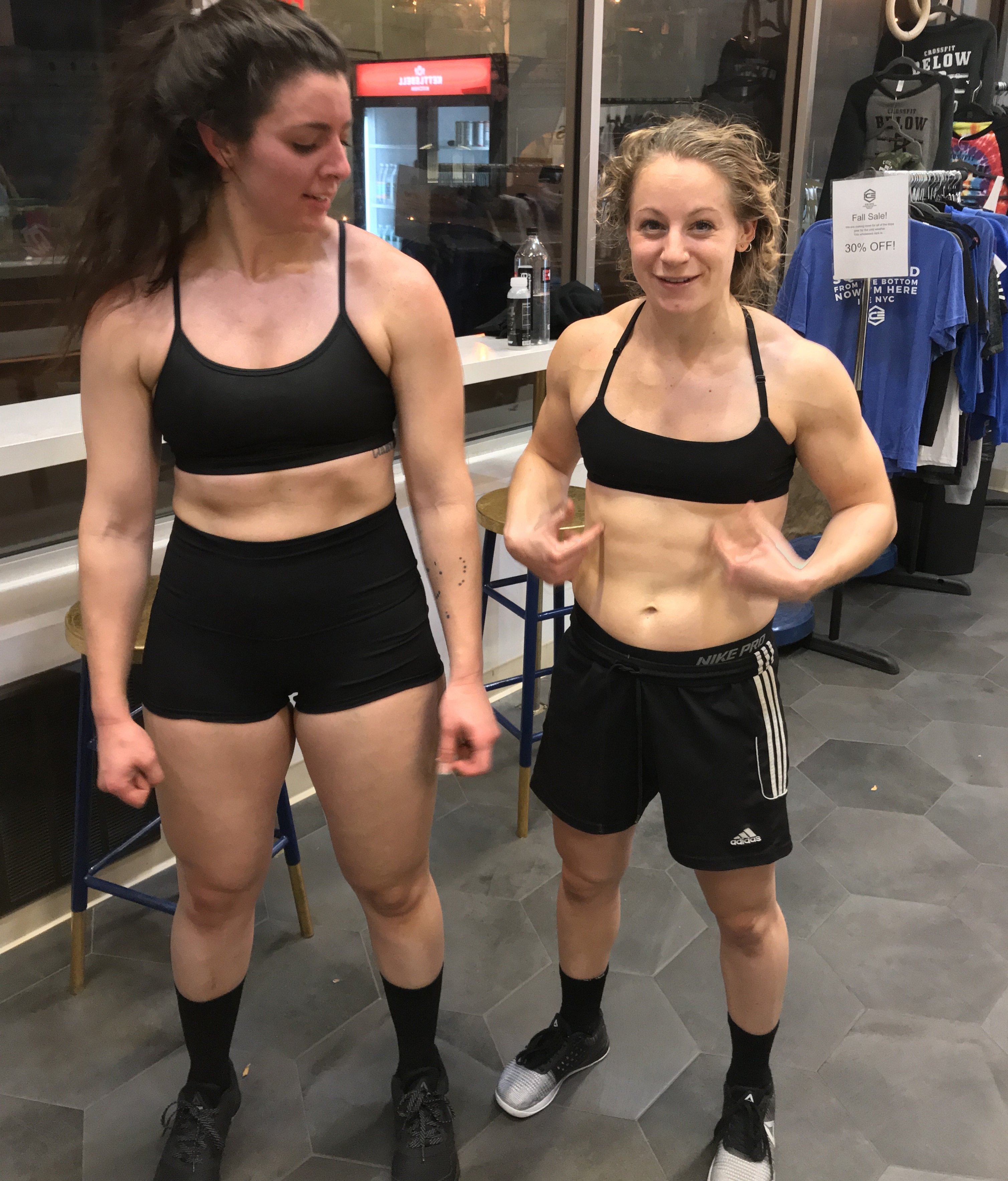 In the name of regularity, I continued drinking as much water as possible throughout my experiment—and it kept me going two or three times a day. Some research suggests that the acids in ACV slow the activity of certain digestive enzymes, which can delay stomach emptying, explaining why my usually-hyper-speedy digestive system acted a little differently.

The ACV Checked My Appetite

Every morning after downing my morning vinegar, I felt really full (and bloated) for a couple of hours. I’m an avid kombucha drinker, so I was no stranger to this full sensation, though. Suddenly I understood the research around how drinking ACV can cause people to eat fewer calories.

Eventually I forced myself to eat some breakfast—I had to fuel my afternoon workout, after all—but I didn’t actually feel hungry until around lunchtime!

My post-ACV full-and-bloated sensation stuck around for the full two weeks. Moving forward, if I’m going to inflate for a few hours, I think I’d rather it be from a deliciously fizzy bottle of kombucha instead of ACV, though.

My Skin Looked The Same

Throughout my apple cider vinegar experiment, I regularly rocked mud masks and chugged extra water (partially just to wash the vinegary burn out of my mouth)—so if my face looked extra glow-y, I can’t say it was thanks to the ACV. I’m sure the extra antioxidants the ACV offered didn’t do my complexion any harm, though!

So, Will I Continue?

My experiment definitely brought ACV’s very-real effects to life. Who can say ‘no’ to the vitamins, minerals, and gut-boosting compounds in this stuff? Though I won’t continue to swig down ACV in the A.M., I want to put the rest of my bottle to good use. I called my go-to nutritionist Keri Gans, M.S., R.D.N., who recommended using ACV in salad dressings—which is how I’ll be reaping the benefits of this golden liquid from now on.

New message from The Vitamin Shoppe. 💬 Just a q

One scoop is all it takes. 💥 Turn up the intens

The forecast calls for long, hot days and chilled

Ready to trade our dollar for a drink. 💸🙌 Ru

It's cardio day. 😬 Which machine are you headin