Our bodies have a magical way of hinting at issues brimming beneath the surface. In fact, even our fingernails offer clues about the state of our overall health. Here are six common fingernail issues—and what they might say if they could talk.

Brittle nails can result from wetting and drying your hands frequently, but they can also indicate suboptimal nutrition, says Emaline K. Brown, N.D., a naturopathic doctor at California integrative urgent care clinic Healthtopia. Often, a lack of vitamin A, vitamin C, or biotin is to blame.

Another common cause: thyroid issues—particularly hypothyroidism. You see, a sluggish thyroid slows down your metabolism, which then slows the production of perspiration, says New York City-based naturopathic doctor Serena Goldstein, N.D. Less sweat leads to less moisture on the skin (and nails), which can cause dryness.

If your nails are persistently brittle, talk to your doctor about testing for any vitamin deficiencies or thyroid imbalances.

Chronically yellow (but otherwise normal) nails may be related to underlying blood sugar issues that are often linked to conditions like diabetes, hypothyroidism, or even psoriasis, says Goldstein. Excess sugar in the body can lead to a process called protein glycation, which can break down collagen (a protein crucial to our skin and nails) and cause nails to yellow.

In this case, Goldstein recommends working with your healthcare provider to identify and address any underlying conditions and/or nutrition issues that may be contributing to unhealthy blood sugar.

However, if your yellow nails are also becoming thicker, you’re likely looking at an acute infection, like nail fungus. “Thickening of the nail plate, lifting of the nail plate from debris underneath, and yellowing are early signs of a fungal infection,” says Erum Ilyas, M.D., a board-certified dermatologist at Montgomery Dermatology in Pennsylvania.

If your nail yellowing is caused by fungus, your doctor will prescribe oral antifungal medication or medicated nail polish or cream to clear it up.

The term ‘pitting’ refers to shallow or deep depressions, holes, or pits in your nails. They may even look like white spots or nicks.

“Little pits scattered across the nail plate can result from any inflammatory skin disorder, the two most common being psoriasis and alopecia areata [when the immune system attacks hair follicles],” says Ilyas. The same inflammation that causes hair loss in alopecia and rashes in atopic dermatitis, psoriasis, and lichen planus can occur in the nail.”

According to the National Psoriasis Foundation (NPF), 50 percent of people with psoriasis experience nail changes. If nail pitting is caused by psoriasis, you may also notice abnormal nail growth and/or discoloration. Eventually, the nail may even loosen and detach from the nail bed.

Related: 5 Things You Can Do Every Day To Fight Inflammation

If you’re dealing with nail issues related to an inflammatory condition, Ilyas recommends making an appointment with your dermatologist. While psoriasis-induced nail issues, in particular, can be challenging to address with topical medications, derms can inject corticosteroids into the nail bed. Cosmetic approaches like nail scraping, filing, and polishing can also improve appearances.

Ridges that appear vertically along the length of the nail (from the tip to the cuticle) are technically called longitudinal striations or bands. These vertical ridges are actually pretty common as we get older, says Ilyas. As we age, cell turnover—the process in which new skin cells are produced and take the place of dead cells—slows. Eventually, this can affect the smoothness of our nails.

However, if those vertical ridges appear alongside symptoms like anxiety, weight loss, swelling feet, or excessive urination, they may be associated with iron deficiency anemia. If you suspect iron deficiency may be an issue for you, see your doctor to run blood work, says Ilyas.

Since the inflammatory conditions that cause nail pitting affect how nails grow and can also contribute to vertical ridges, your doctor may want to rule those out, too.

Ridges that run from one side of your nail to the other are known as Beau’s lines. “These horizontal ridges are associated with illnesses and conditions that suddenly slow or stop nail growth,” explains Ilyas. Common examples include chemotherapy, diabetes, and kidney conditions.

Another health issue behind Beau’s lines: zinc deficiency. “Zinc is an important growth factor for cells throughout the body, especially actively dividing cells,” Ilyas notes. “Our nails are constantly growing, which requires nail cells to constantly divide and develop.” If we’re zinc deficient, our body will send whatever zinc it has to vital organs. This leads to poor nail growth and Beau’s lines.

Since these underlying issues can be serious, make an appointment with your doctor if you’ve noticed unexplained Beau’s lines.

Black, dark brown, or reddish streaks beneath your nail may seem like quite the cause for concern. However, they’re usually the result of a trauma to the nail, such as accidentally closing a door on your fingertips. In these cases, the discoloration you see occurs when blood vessels under the nail bed break, says Goldstein. (They’re called splinter hemorrhages.)

That said, these dark streaks can be caused by health conditions, including psoriasis and endocarditis (an infection in the heart).

Black streaks may also be the result of melanoma, the most serious type of skin cancer. “In these cases, the black line is much cleaner-looking than that from a trauma or broken blood vessels,” says Goldstein. Melanoma develops in melanocytes, the skin cells that produce melanin, the pigment that gives skin its color—hence the dark discoloration.

Since melanoma is incredibly serious, Ilyas recommends making an appointment with your dermatologist at the first sight of any black streaks or lines just to be safe.

Pin this helpful infographic for reference: 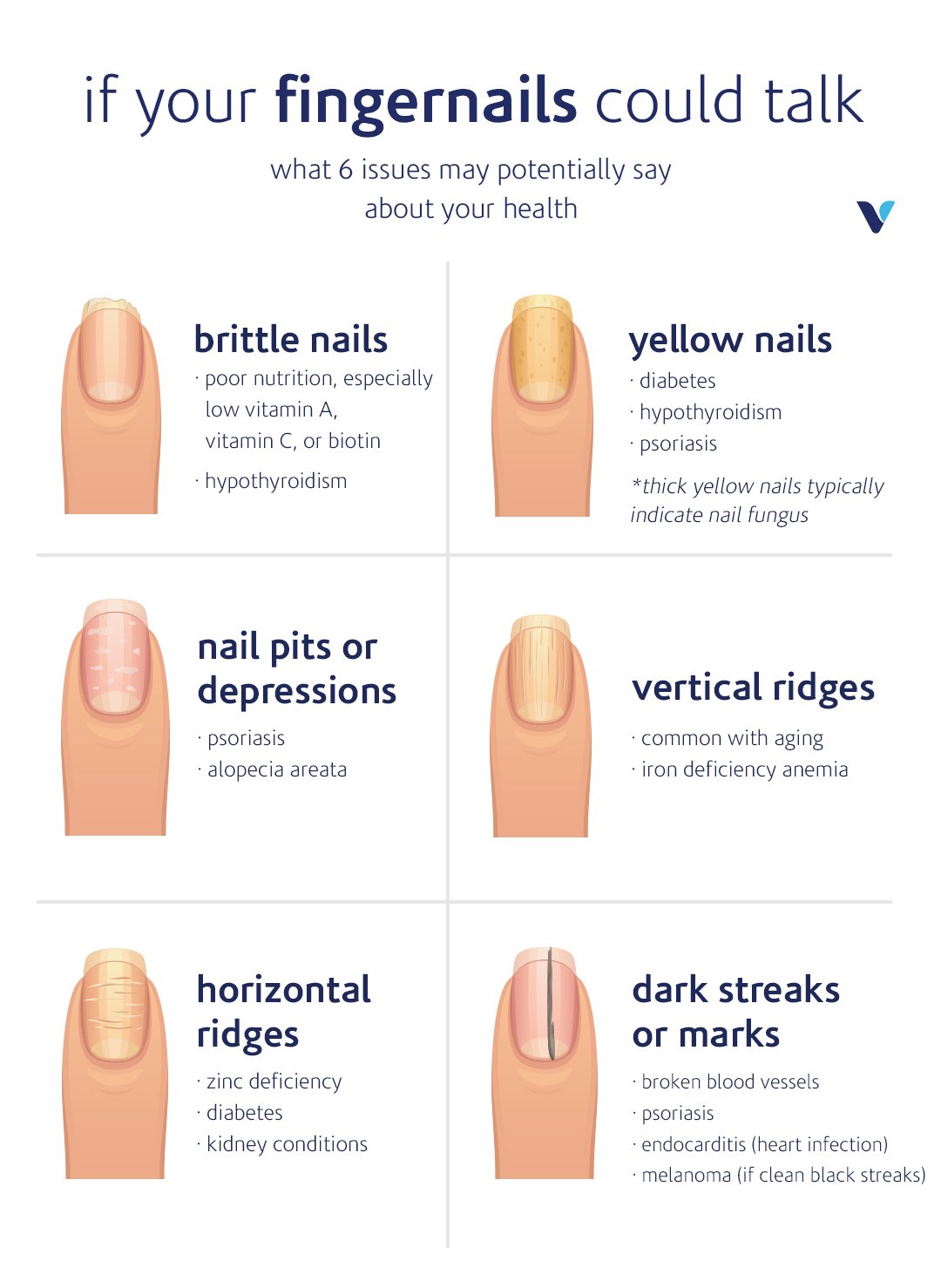