Having a well-stocked pantry is key to eating well year-round. Whether you want to create a decadent Sunday night meal or need to throw together a weeknight dish in five minutes, you’ll have a variety of healthy foods at your fingertips and no excuse to rely on takeout.

Whether you’re in the produce aisle, the dairy section, or an aisle chock-full of boxes and cans, there are plenty of worthwhile staples all over the grocery store. Here are the foods dietitians always keep stocked in their pantries to make healthy eating as easy and delicious as possible.

You’ll often find almond milks in both the refrigerated section and the center aisles, because you can actually store them unopened fridge-free for a year. (Once you open it, though, you’ll need to pop it in the fridge and use it within 10 days.) This beverage is often fortified to include ample amounts of calcium and vitamin D, vitamin E, and vitamin A. A cup of unsweetened almond milk is just 30 calories and is a versatile ingredient that comes in handy in sauces, stews, muffins and quick breads, smoothies and lots of other recipes.

Whether it’s almonds, walnuts, pistachios, or cashews, I’m nuts about nuts. Especially because I know that along with a mouthful of crunch, I’m getting heart-healthy fats—which have been shown to reduce cholesterol levels—some fiber (about two grams per ounce, and which we don’t get enough of), and around six grams of plant protein. I add nuts to salads, roasted veggies, hot or cold cereal, or just enjoy them right out of the package.

Non-perishable whole grains like brown rice, buckwheat, barley, sorghum, whole-grain pasta, farro, freekeh, and quinoa come in handy when you need a nutrient-rich carb to add to your plate. “Grains such as these provide a dose of fiber that promotes heart and gut health, along with protein that aids in replenishing muscles,” says Collette Sinnott, R.D., C.P.T. Grains make for a great base because you can top them with veggies, protein, and a light sauce. Sinnott loves to use brown rice and quinoa as bases for Mexican and Indian-inspired meals and whole-wheat pasta as a base on busy weeknights.

Need to prep a meal last minute? Canned tuna is a lifesaver. “Experts suggest eating fish at least twice a week, and canned fish is a relatively inexpensive and shelf-stable source of protein,” says Liz Ward, R.D.N. Fish is rich in omega-3 fatty acids that help boost circulation to maintain your heart and brain function, and may also support mood. I like to use tuna in sandwiches and casseroles, or to top a colorful salad.

Good ‘ole PB is a good source of protein (around four grams per tablespoon) and provides heart-healthy unsaturated fats. It’s also a source of bone-building magnesium and fiber. “Peanut butter is also low in cost compared to other nut butters and can be added to oatmeal, plain yogurt, and smoothies, or spread onto sandwiches or whole-grain crackers,” says Ward.

Beans are the most underrated superfood in the book. First off, they’re rich in complex carbs, and offer an array of vitamins, minerals, and antioxidants. Beans also supply around six grams of protein per half cup—and unlike some animal proteins, they contain little to no fat and no cholesterol. To top it off, they also pack a hefty dose of soluble fiber (eight grams per half a cup), which may help lower cholesterol and triglyceride levels. But since canned beans are often high in sodium, just rinse them before using. (By doing this, you can ditch up to 40 percent of the salt!)

Dried cranberries, raisins, or apricots make the perfect addition to homemade trail mix, baked goods, or cereals. You can also add a tablespoon or two of dried fruit to typically bitter veggie dishes, like sautéed broccoli rabe or spinach, to take the edge off. Dried fruits are rich in iron and cranberries in particular contain antioxidants called proanthocyanidins (PACs) which may help prevent urinary tract infections.

Chicken or veggie broth can add flavor when cooking grains, steaming veggies, or loading up the crockpot, according to Mandy Enright, M.S., R.D.N., R.Y.T., creator of the couples nutrition blog Nutrition Nuptials. Low-sodium broths contain about 45 milligrams of the salty stuff per cup, versus as much as 850 milligrams in regular broth.

This versatile ingredient adds savory flavor to a variety of dishes. Ginger Hultin, M.S., R.D.N., C.S.O., spokesperson for the Academy of Nutrition and Dietetics uses it to add a cheesy taste to popcorn, sauces, salad dressings, and soups. Nutritional yeast costs less than a dime per serving, provides some protein (1.5 grams per teaspoon) and fiber (almost a gram per teaspoon), and is fortified with B vitamins, which are important for a healthy nervous system.

Take this shopping list with you the next time you run out for groceries: 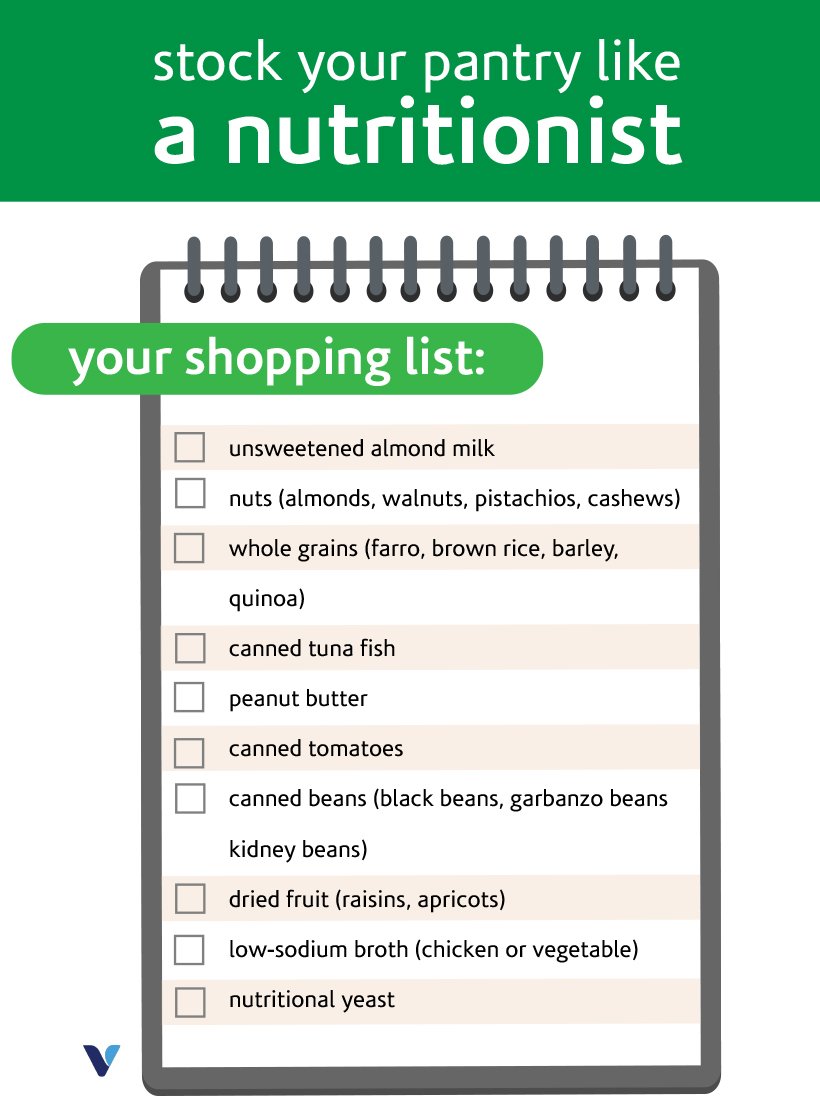 Bonnie Taub-Dix, R.D.N., C.D.N., is an award-winning author, spokesperson, speaker, consultant, and owner of BTD Nutrition Consultants, LLC. She has been featured on TV, radio, and print, as well as in digital media, including Everyday Health, Better Homes & Gardens, Women’s Health, and U.S. News & World Report. She is a recipient of The Academy of Nutrition and Dietetics’ Media Excellence Award.

How are you refueling after training? 💪 Optimiz

Who doesn't love a classic strawberry shortcake in

"I wanted a lifestyle change as preparation for my