When we’re standing in the supermarket, the only noticeable difference between organic and conventionally-grown or raised foods—whether produce, meat, or dairy—is often the price tag. And as much as we might like to go organic, the thought of paying almost twice as much for that carton of blueberries or milk often stops us in our tracks.

Organic foods, which are grown without conventional pesticides or come from animals raised in a way that reflects nature more closely, definitely offer benefits, says dietitian Adalise Jacob, R.D., co-founder of the healthy lifestyle site Smart Homefull. When it comes to produce, “research has linked high concentrations of pesticides to concerns like brain and nervous system damage, hormone disruption, and even cancer,” she says. (Plus, one study in the British Journal of Nutrition shows conventionally-grown produce may contain fewer antioxidants than its organic counterpart.) As far as animal products go, not only does research show that organic meat and dairy contain higher levels of important omega-3 fatty acids, many experts question the safety of the hormones and antibiotics given to conventionally-raised animals.

Luckily, it is possible to reap the benefits of organic foods without breaking the bank. All it takes is a little info about which foods are worth the organic price tag. We rounded up the top five—and they’re worth every penny.

According to the Environmental Working Group (EWG), an organization that researches and advocates for environmental issues in the United States, spinach has been shown to contain as much as 1.8 times more pesticide residue by weight than any other crop. That’s why it often tops the EWG’s annual “Dirty Dozen”, a list of the top twelve pesticide-laden fruits and veggies out there.

Not only do conventionally-grown strawberries contain pesticides—up to seven different types, with three times as much residue as other produce—but conventional strawberry growers also reportedly use poisonous gases (called fumigants) to sterilize their fields before planting, which can account for up to 80 percent of the chemical residue found on harvested strawberries, the EWG reports.

These lunchbox staples, which held the top spot on the Dirty Dozen list for years, are another fruit to watch out for. Why? Apples tend to have multiple types of pesticides on them, which is weighted heavily for the Dirty Dozen rankings, says EWG senior analyst Sonya Lunder.

The amount of pesticides on pears is actually increasing over time, and has more than doubled since 2010, according the EWG. Plus, pears often have residue not just from pesticides, but also from insecticides and fungicides, too. Fungicides tend to appear on pears in the highest concentrations, because they’re used to keep the easy-spoiling fruit ‘fresh’ during transportation. Another scary fact: The EWG found that many pureed pear baby foods sold in the U.S. contain too many pesticides to be sold in Europe.

The concerns about conventional dairy foods are a little different than those about the produce on the Dirty Dozen list, but it’s still important to buy organic dairy whenever it’s financially feasible, says Jacobs. Although regulations on the meat and dairy industry are a little tricky—like the fact that non-USDA-organic eggs can still put the words ‘free-range’ on the label—it’s still worth choosing organic. Dairy products labeled ‘USDA organic’ must come from companies who protect natural resources and raise animals without antibiotics or growth hormones. These animals are also typically raised on their natural diet (like grass) instead of the corn feed given to many conventionally-raised animals.

Related: 6 Foods That Might Be Messing With Your Hormones

“We definitely support the purchasing and consumption of organic meat and dairy,” says Lunder. “Our primary concern is the unnecessary use of antibiotics in conventional meat and dairy.” While the U.S. government asserts that the amounts of hormones given to farm animals don’t affect human health, they’ve been banned in Europe for decades and research from other parts of the world suggests they may be implicated in health issues.

Antibiotics share a similar story: Though the FDA implemented a process to limit the use of antibiotics in livestock to ‘medically necessary’ reasons in 2013, participation of those producing the antibiotics and raising the livestock has been voluntary. Meanwhile, studies show that consumption of antibiotic-containing animal products contribute to the U.S.’s nationwide antibiotic resistance issue, and the World Health Organization has urged farmers and the food industry to stop using antibiotics in healthy animals.

Keep this shopping list handy next time you head to the supermarket: 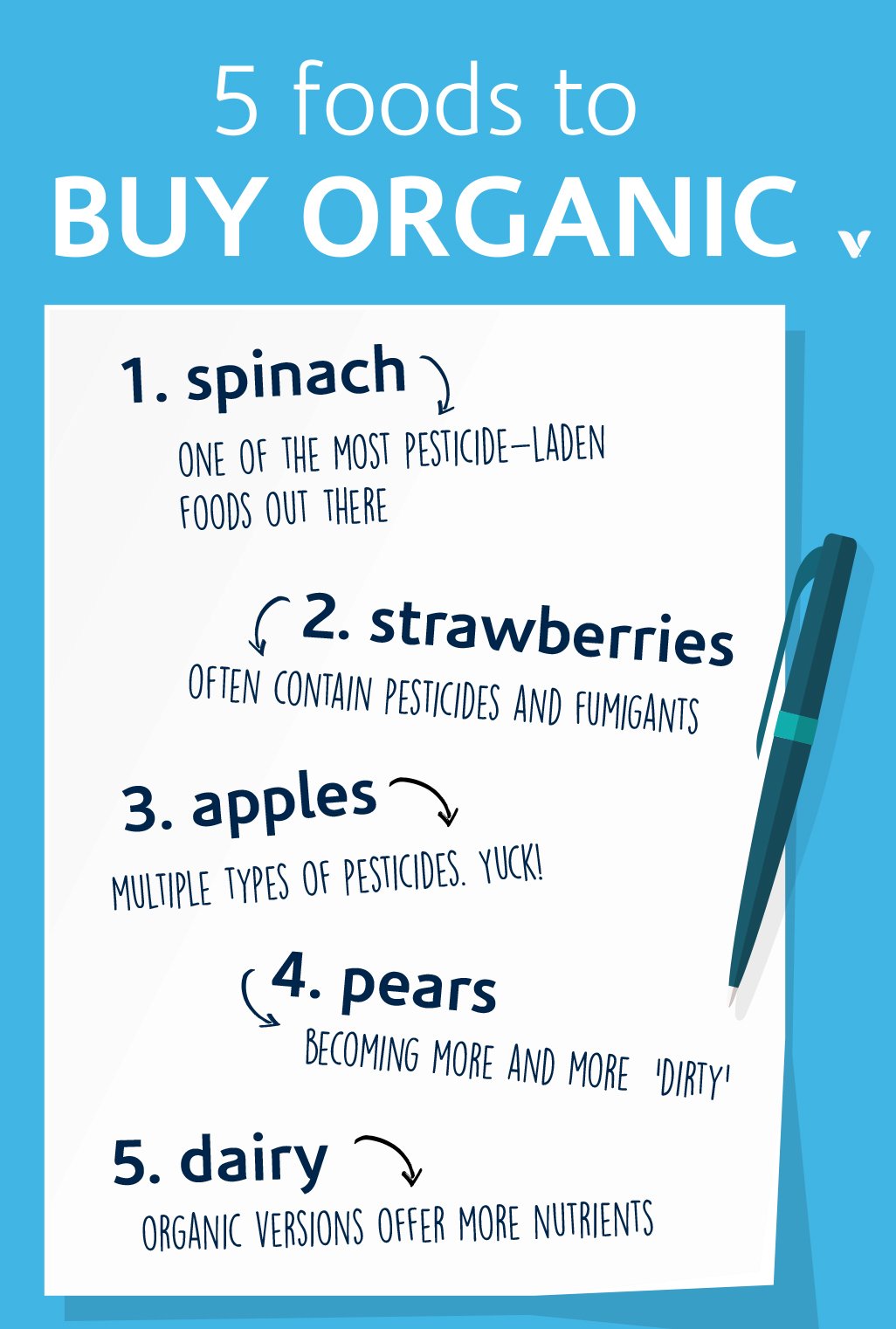