Chances are, you’ve heard of ginseng. You may have even seen it listed as an ingredient on your favorite energy drink. But how much do you really know about this popular herb? Here, we break it all down for you.

That’s right, the mysterious ginseng is, in fact, an herb. What’s more: It’s an herb with a long history.

Though there are several varieties of ginseng out there, the two most popular forms are American ginseng (Panax quinquefolis) and the more potent Asian ginseng (also called Korean ginseng or Panax ginseng). Depending on when Asian ginseng is harvested, it also may be also referred to as ‘red ginseng’ or ‘white ginseng.’

The slow-growing ginseng plant itself is leafy and green with bright red berries, but its the fleshy roots that wield its benefits.

Asian ginseng has been used in traditional Chinese medicine for at least 2,000 years, typically to make energizing tonics.

Both American and Asian ginseng contain two important compounds: ginsenosides and gintonin. Together, these compounds are credited for the bulk of ginseng’s health benefits.

How? According to a meta-analysis published in the Korean Journal Of Medical Science, the herb boosts levels of dopamine, noradrenaline, serotonin (the ‘feel-good’ hormone), and cyclic adenosine monophosphate in the brain. Among other things, these chemicals help regulate mood, attention, memory, and mental energy.

Related: What Causes Brain Fog—And What Can You Do About It?

Though the bulk of ginseng research focuses on cognition, researchers have also taken interest in its effects on physical performance.

Because ginseng supports neurotransmitter activity in the brain (and blood circulation), research—like this Journal of Ginseng Research review—suggests it can support our bodies and minds during physical activity.

It’s worth noting, though, that other studies haven’t seen much benefit of ginseng on exercise, so consider it more of a helpful tool than a fitness cure-all.

According to McCulloch, ginseng may also promote sexual well-being—particularly in men.

In fact, a systematic review published in the British Journal of Pharmacology suggests red ginseng may benefit men with sexual performance issues. (They do recommend further research to confirm exactly how it works.)

A more promising use for ginseng: to support healthy blood sugar.

In a review published in PLoS One, researchers found that both Asian and American ginseng significantly improved blood sugar levels in people with and without blood sugar issues.

According to the National Institutes of Health, popping three grams of American ginseng two hours before a meal may even lower blood sugar after eating, since the herb supports function of the pancreas (which produces the blood sugar-controlling hormone insulin), says one Evidence-Based Complementary & Alternative Medicine paper.

Ginseng Precautions To Keep In Mind

Despite ginseng’s popularity and widespread use, certain populations should proceed with caution.

If you take medication for high blood pressure or diabetes, talk to your doctor before taking ginseng, says Sollid. Same goes for anyone with insomnia or schizophrenia, or who has an upcoming surgery. (Ginseng may interact with certain prescriptions, impact blood sugar before and during surgeries, and increase heart rate.)

Due to a lack of research on safety, children and women who are pregnant or breastfeeding should also steer clear of the herb for now.

Adding Ginseng To Your Routine

If you’ve gotten the green light to try ginseng, you can incorporate it in a number of ways.

Related: 5 Foods And Drinks That Are Zapping Your Energy

The first: Play around with ginseng root in the kitchen. (You can find it online, at Asian supermarkets, and at some health food stores.) Typically bitter—somewhat like ginger root—ginseng makes for a great palate cleanser. One popular way to use it: chicken ginseng soup.

To keep your ginseng routine super-simple, you can sip on a pre-made ginseng tea (like Triple Leaf Teas’ American Ginseng tea) or pop a supplement (like Prince of Peace Korean Red Ginseng).

If you’re not into tea or cooking, you can also find ginseng in supplement form (typically powder or capsules). Just keep in mind that Asian ginseng, the most potent kind, may leave some people feeling over-stimulated or on edge, says McCulloch. If you tend to be sensitive to stimulants, stick to the American variety.

Many experts recommend starting with somewhere around 200 milligrams of ginseng per day. As with any supplement, be sure to follow label instructions and monitor your reaction closely. 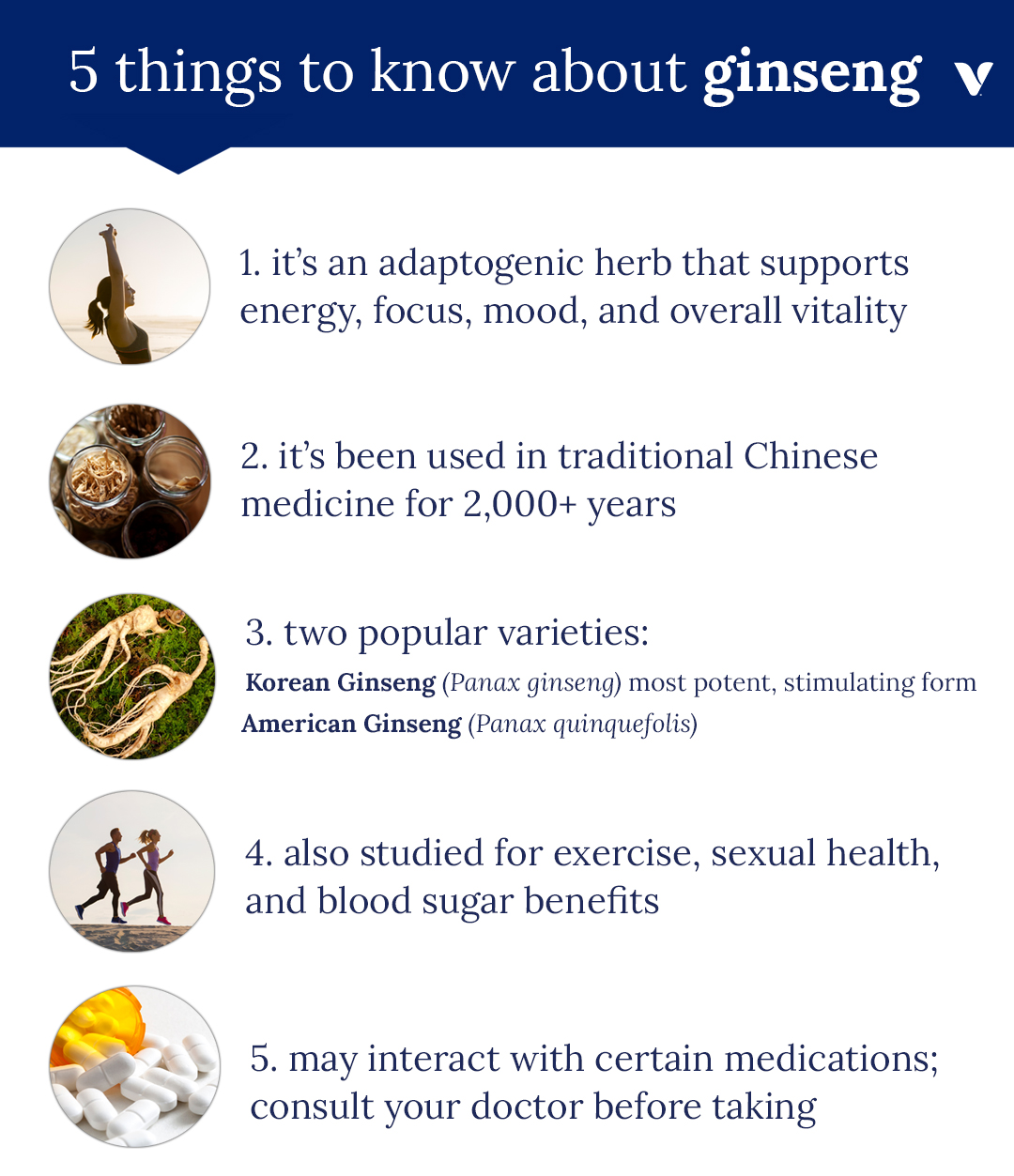 Just putting in the work. 😉

Grab your workout buddy and break a sweat on #Nati

"As a busy mom and business owner, I have to remin

“Our Health Enthusiast Josh and his stack of sup