Rest assured, vegans, vegetarians, and anyone interested in eating more plants: Chicken and steak aren’t your only protein options! In fact, plenty of plants provide protein.

The go-to plant source for anyone looking to score some protein meat- (or egg-) free: legumes. Here are seven nutrition experts love.

If you’ve ever wondered what the heck is the difference between a legume, a pulse, and a bean, you’re far from the only one. That confusion ends now.

“Legume is a broad category that includes any plant that grows in a pod,” says nutritionist Mike Roussell, Ph.D., co-founder of Neuro Coffee. Some of the most popular legumes out there include peas, peanuts, soybeans, and green beans.

“The edible dried seeds we eat that come from plants in the legume family, though, are called pulses,” Roussell adds. Lentils, chickpeas, beans, and split peas are all pulses. (Peanuts, fresh soybeans, fresh peas, and fresh beans are not considered pulses because they are not dried prior to preparation and consumption.)

In addition to being inexpensive, sustainable, and incredibly versatile, pulses offer a variety of nutritional benefits.

First of all, “all pulses are filled with fiber,” says Monica Auslander Moreno, M.S., R.D., L.D.N., nutrition consultant for RSP Nutrition. “Most folks know that fiber can contribute to a healthy bowel, but it also helps balance blood sugar and cholesterol levels.”

Plus, the fibers found in pulses are known as prebiotic fibers, meaning they nourish the probiotic microbiome communities in your gut, as well.

Related: Are Lectins The New Gluten?

Perhaps the most sought-after nutrient in pulses, however—especially for those who don’t eat meat, or want to eat less of it—is the protein. Below are the seven highest-protein pulses in the game; consider adding them to your soups, salads, and more.

“Most folks aren’t acquainted with the humble black lentil; but they are a chewy, fine addition to any meal,” says Moreno. Black lentils are rich in zinc and folate, in addition to providing 12 grams of protein per half a cup.

Another perk of black lentils: “They aren’t as mushy as other lentils,” says Moreno. Try them plain with your favorite spices, in soups, or in these Crispy Black Lentil Falafel Bites.

Providing nine grams of protein per half a cup, green lentils are also rich in iron, a nutrient many women and active individuals need more of. They also pack more potassium than a banana!

“I recommend green lentils often, since many meat lovers prefer their texture over beans as a ground beef replacement,” says Jones. Next time you’re craving a burger but want to go meat-free, try making lentil patties (or these Lentil Walnut Tacos).

Probably the most forgotten-about of the pulses, split peas look somewhat like lentils in their raw, dried form. A double-whammy of satiating nutrition, half a cup contains eight grams of both fiber and protein, says Kelly Jones, M.S., R.D., C.S.S.D., L.D.N. Like green lentils, they’re also high in potassium.

Another often-overlooked pulse, navy beans provide just short of eight grams of protein per half a cup, in addition to magnesium.

“Navy beans become quite a delicious soup when prepared with vegetable or bone broth, some salt, and onion,” says Moreno. They can also be a creative addition to your morning meal: Try mashing up half a cup to one cup of canned navy beans (or any pulse, for that matter) with a fork and heating them in a frying pan, recommends Roussell. It’s like a simplified version of refried beans—with less fat and calories—and pairs deliciously with scrambled eggs.

Hello, hummus! A pulse many of us know well, chickpeas (a.k.a. garbanzo beans) pack a little less than eight grams of protein per half a cup, along with minerals like magnesium and calcium, and vitamin B6.

Chickpeas are delicious in everything from dips to falafel to Indian-style curries. To make your own hummus, Moreno recommends blending shelled chickpeas with tahini, garlic, olive oil, and a touch of lemon and salt—it’s that simple!

Rich in calcium and magnesium, as well as vitamin B6, black beans contain a little more than seven grams of protein—and eight grams of fiber—per half a cup.

Moreno’s favorite way to use black beans: BROWNIES! Instead of egg and oil, Moreno blends a can of strained, pureed black beans into dry brownie mix. “They bake just the same in the oven and come out fudgy and packed with protein,” she says.

Kidney beans provide just shy of seven grams of protein per half a cup, along with about five grams of fiber and some vitamin C, says Moreno. 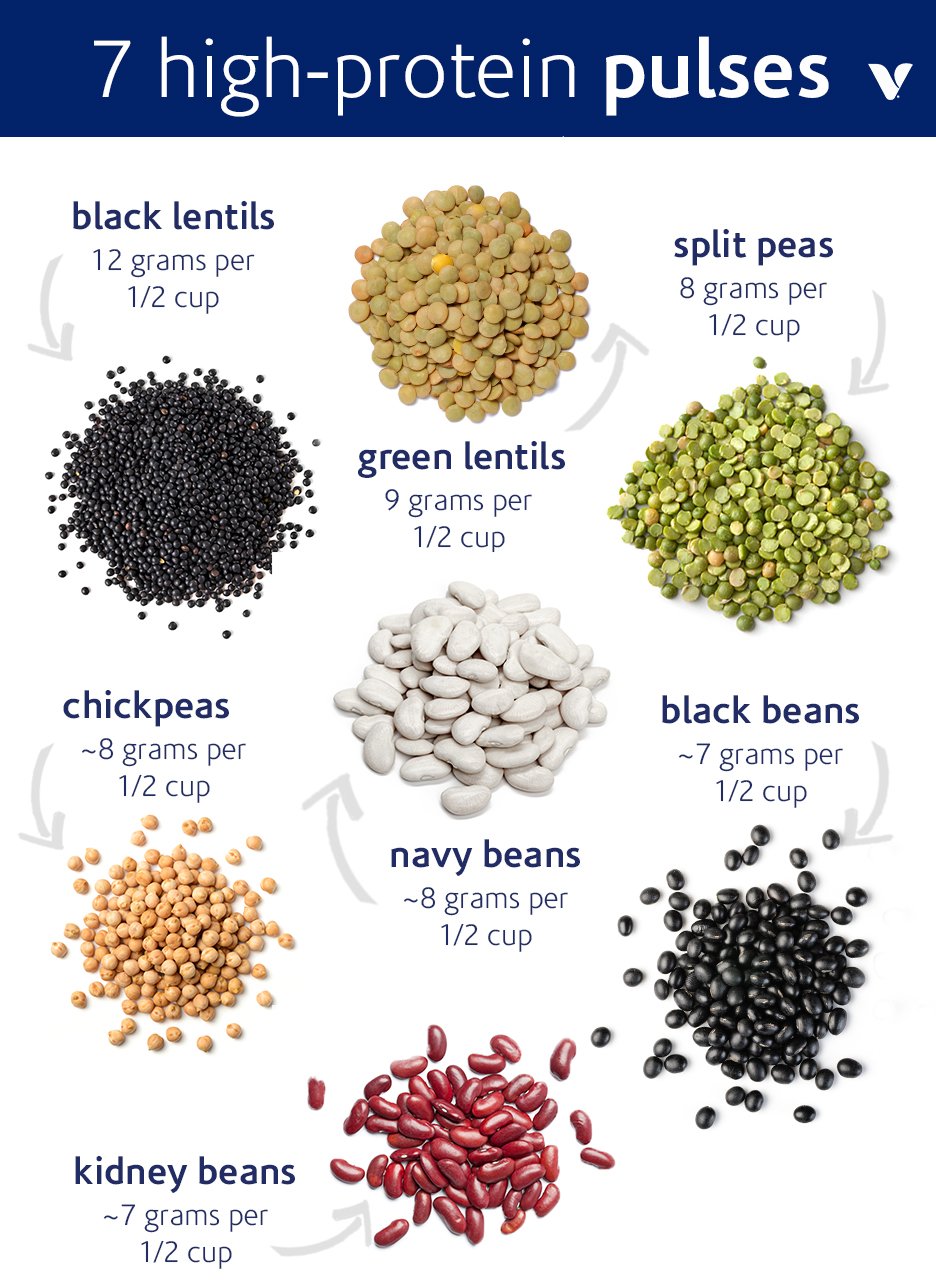