Exercise does your body good, both inside and out, with benefits impacting everything from your heart to your muscles to your mood. And don’t forget your brain! Cardio workouts are associated with brain-related perks, but high-intensity interval training (HIIT) workouts may be particularly beneficial. Here’s what you need to know about your noggin on HIIT, plus a sample workout to try for yourself.

Generally, cardio workouts (think anything that gets your heart pumping faster than usual) do your brain a solid. When it comes to HIIT, in particular, the potential benefits include increased blood flow to the brain, increased brain activity, improved cognitive abilities, improved mood, and increased levels of growth factors such as brain-derived neurotrophic factor (BDNF), according to Ryan Glatt, F.A.F.S., C.P.T., NBC-HWC, personal trainer and brain health coach for the Pacific Neuroscience Institute at Providence Saint John’s Health Center in Santa Monica.

And though more research needs to be done, HIIT appears to promote increases in BDNF to a greater extent than standard steady-state aerobic exercise, both Glatt and Vernon suggest.

In addition, “there is some research that HIIT might be more effective in encouraging fat oxidation and improvements in VO2 max, which may benefit brain health,” Glatt adds.

The end result? “In comparison to moderate-intensity aerobic exercise, some research has found that HIIT training might improve cognitive abilities, such as processing speed,” he says.

Still, that doesn’t mean everyone should do HIIT. “Enjoying exercise is key to adherence,” shares Glatt. “Individuals should also be wary of the potential contributions of faster, higher-velocity, and repetitive movements to injury risk.” New exercisers and those with obesity, for example, may be best off with a HIIT-free routine.

How to approach HIIT For brain benefits

“There is no ‘ideal’ protocol for HIIT training, and since HIIT general refers to the undulation of heart rate from lower to higher levels and back down to lower levels, there are many ways to incorporate HIIT,” Glatt says. But if you’re trying to decide whether to stick to HIIT workouts that focus just on traditional cardiovascular modalities, like running or cycling, or those that incorporate strength-based moves with cardio, your best bet is to mix things up.

“Some research has found that multi-component training programs, which incorporate multiple types of exercise (such as strength training and cardiovascular exercise), may be more effective in preventing dementia and gleaning a variety of brain health benefits when compared to single-modality exercise programs,” Glatt says.

Also important to know: With HIIT, you don’t have to spend too much time working out. “On average, two to three sessions of HIIT training per week may improve cognitive and mental health acutely and perhaps more sustainably after several weeks or months of exercise,” notes Glatt.

Hit that benchmark consistently and you can rest assured that your brain is reaping the benefits of your workouts. That said, there is a particular HIIT protocol that has been studied for its brain benefits: Four sets of four minutes of high-intensity training followed by three minutes of low-intensity active rest, according to Glatt.

Your Noggin will love this HIIT routine

Not sure where to start? Try this 45-minute HIIT workout which incorporates those four-minute hard intervals into a series of strength exercises for maximum impact. 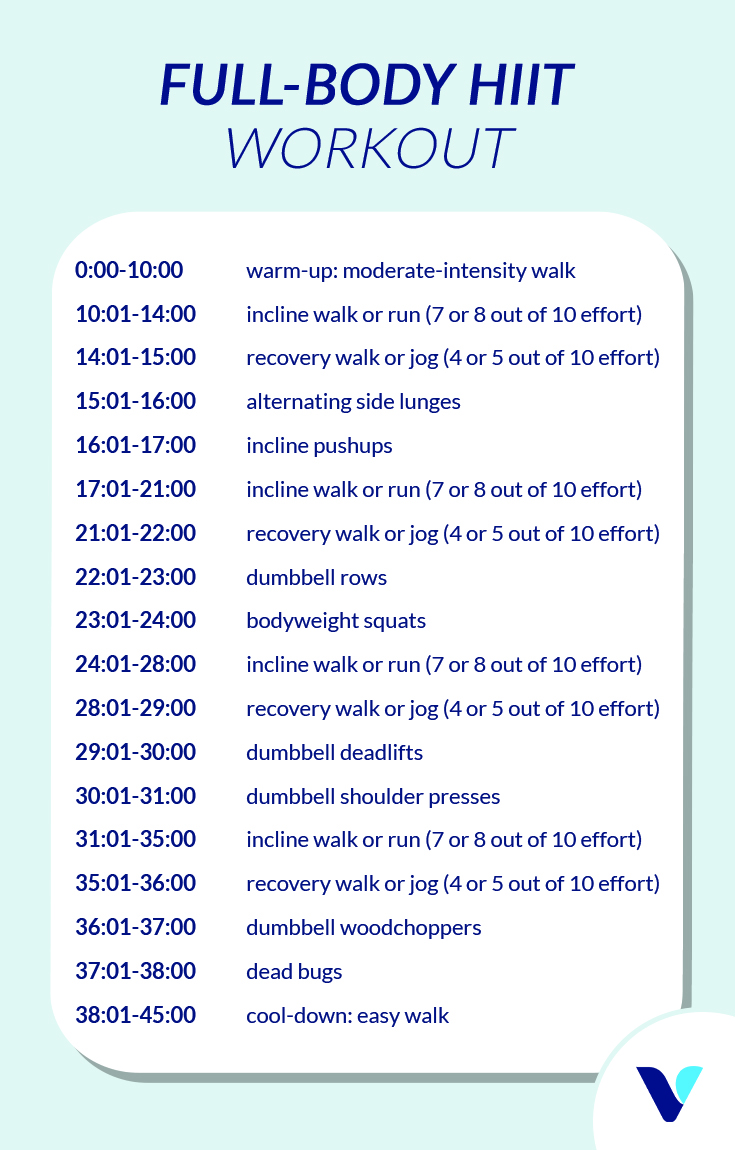 "At Truvani, we bring you products with ingredient

All smiles when we're fueling our workouts with @E

Your sweet tooth is calling. 📞 And @AP_PrimeBit

In celebration of AAPI Heritage Month, we asked ou

GIVEAWAY ALERT! 📣 Think you know how many @Solg