We’ve all unwound after a long day by enjoying a glass (or two) of vino with dinner. After all, not only does wine make you feel all warm and fuzzy, but you’ve probably heard it offers some sweet health benefits, too. That means a glass of red is totally harmless, right?

Over the last 40 years, quite a few studies have linked red wine to a lower risk of cardiovascular disease, according to a review published in the Journal of Cardiovascular Disease Research. These researchers hypothesize that the antioxidants in red wine (called polyphenols) can help protect your heart from inflammation, lower bad cholesterol, and support smooth vascular blood flow. Epidemiological studies also show that wine drinkers have higher HDL (‘good’) cholesterol than non-wine drinkers, according to the review.

Antioxidants are known for their ability to protect your bod from free radicals, which are molecules that can cause damage to your cells and DNA and lead to a whole host of diseases, including cancer. The most well-known antioxidant in red wine is resveratrol, which is found in the skin of the grapes used to make it, says Alyssa Rothschild, R.D.N. White wine contains resveratrol, too, but because grapes are fermented longer to make red wine, it contains more of the stuff explains Rothschild. And get this: Grapes actually contain about 90 percent more resveratrol than blueberries, which are often thought of as the number one antioxidant powerhouse, according to a study published in the Journal of Agriculture and Food Chemistry.

However, not all research on red wine supports its super-drink status. For instance, one 2014 study published in JAMA Internal Medicine compared the health of older adults who drank moderate amounts of red wine regularly against the health of those who didn’t—and found no significant differences.

Another caveat: Many of the studies done on red wine focused on people who eat a Mediterranean diet, which is chock full of antioxidant-rich foods like salmon, olive oil, and nuts, says Myers Hurt, M.D., family physician at Diamond Physicians in Dallas. So red wine alone may not be causing all those heart health benefits—though it does seem to be an a-okay part of a generally healthy diet. For example, one study published in the journal Clinical Interventions in Aging found that a Mediterranean diet—which features moderate red wine consumption—is associated with lower blood pressure and inflammation levels.

Mediterranean diet or not, red wine is still a better option than other types of booze. “If you’re trying to decide between a mixed drink or a glass of wine, it’s a no-brainer,” says Rothschild. “Unlike mixed drinks, which are loaded with calories and added sugars, wine is one of the smartest drinks you can choose.” Red wine is alcohol, though, so it’s still more or less ‘empty calories.’ (125 of them per five-ounce glass, to be exact.)

So if you are going to imbibe, stick to that five-ounce serving size. Most of the studies on red wine look at that specific amount of alcohol (one drink a day for women and two a day for men), which matches the Dietary Guidelines for Americans’ limits for alcohol consumption, says Rothschild.

Moderation is key, as it is with the rest of your diet, says Hurt. And if you’re looking for heart-health benefits, the Mediterranean diet (yes, with vino) is your best bet at reducing your risk of heart attack and stroke risk, he says.

Related: Check out healthy oils and seeds for Mediterranean eating.

If you don’t drink, though, you shouldn’t start just because you’ve heard red wine could be good for you, says Rothschild. You can also find resveratrol in other foods, like peanuts and dark chocolate, says Rothschild. And, ya know, you can also just eat the grapes themselves…

Pin this infographic so you can whip out your vino knowledge next time you buy a bottle: 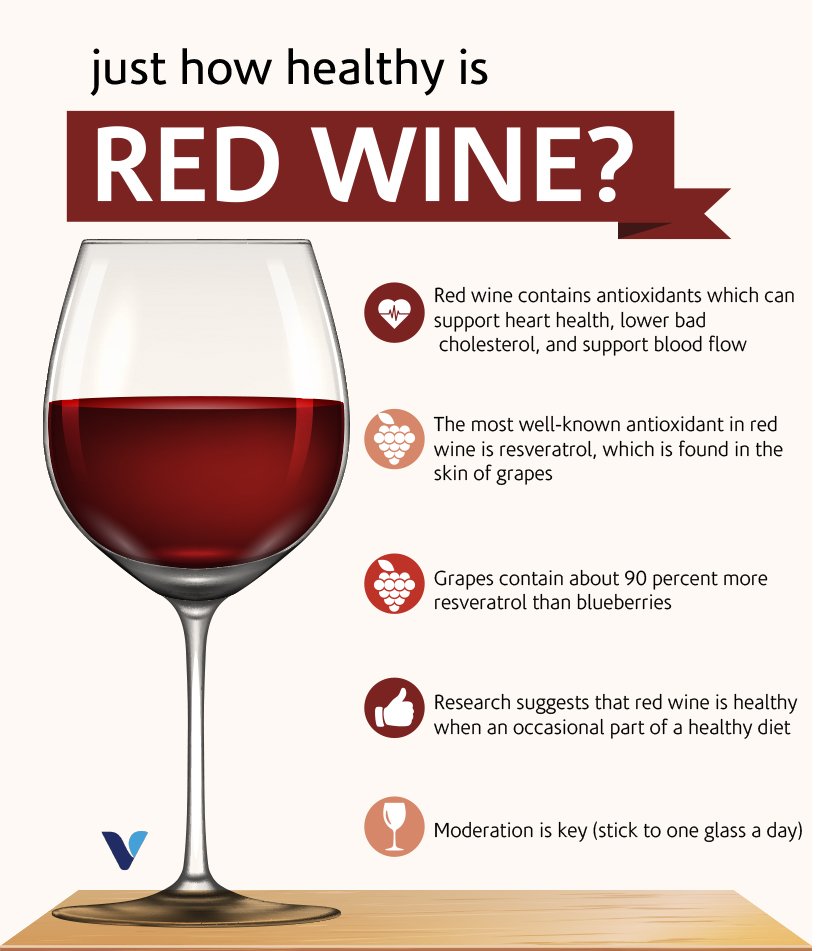 As we close out #NationalMushroomMonth, it's only

How does identity inform and inspire our wellness

Figuring out which pre-workout is best for you can