If you look at the nutritional label before you buy or eat something, chances are your eyes first dart to the calories section. Sure, that’s a good start—but there’s so much more to your food than its calories.

We know what you’re thinking: Food labels can be super-confusing. How much does the amount of fat (and the type of fat) really matter? How much sugar is too much? What else should you be looking at?

You’re not the only one wondering. In fact, the Food and Drug Administration is rolling out updates to food labels to make them easier to digest as we speak. (You’ll see the new and improved labels in 2018.)

But even with easier-to-read food labels, you have to know what you’re looking for! This annotated nutrition label will walk you through everything worth checking on the back of that jar, bag, or box of food. Then, read on for more details about why these parts of the label are important. 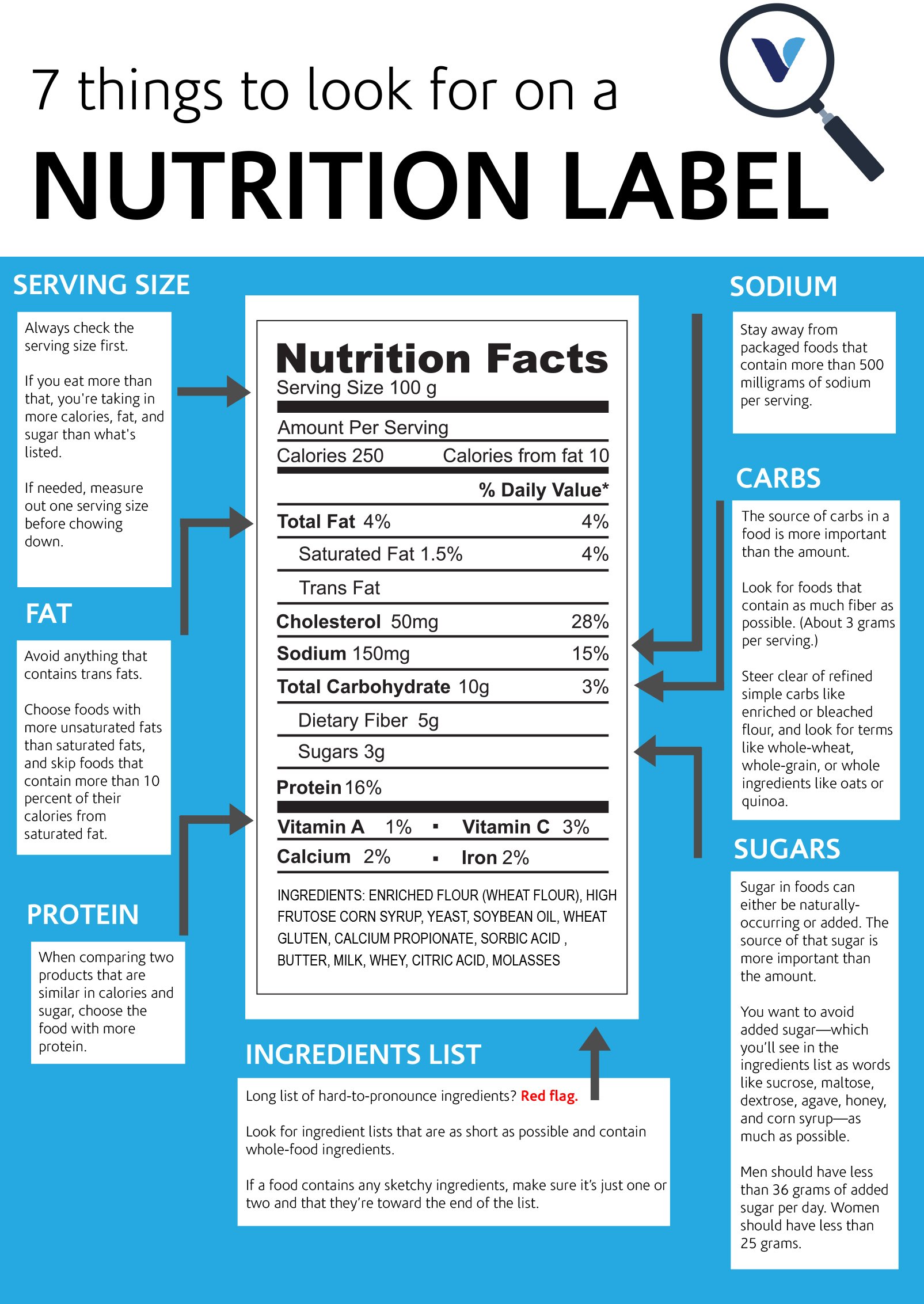 Even if you’re super diligent about checking your labels for calories, you need to make sure you’re always looking at the serving size on the package, too, says Natalie Rizzo, M.S. R.D., founder of Nutrition à la Natalie.

For example—that granola you add to your Greek yogurt. Say the serving size is a third-cup at 120 calories. If you’re not careful with your pour, you can easily use double that amount and spoon down close to 250 calories of granola. Not a big deal once in a while, but consistently overlooking this small detail can quickly become a problem and lead to weight gain.

Plus, not only do you double up on calories when you ignore serving sizes, but you also double up on everything else in that granola—like its sugar. (We’ll address that one soon.)

Most current food labels just list a single serving size, but as labels sync up to the FDA’s new requirements, they should also list the number of servings in the entire container or package. What to do? Take a look at what that serving size really is, and if you need to measure it out, do it!

The ingredients list may be at the very bottom of your food label, but it’s one of the first things you should look at, says Rizzo.

Sometimes the ingredients list can be super intimidating, though—especially if it’s really long and full of words you don’t recognize. Put simply, a labyrinth of hard-to-say ingredients is a major red flag, since it signals that a food is heavily processed, says Rizzo.

You want a food’s ingredient list to be relatively short and made up of real whole foods you can easily identify and pronounce, she says. Keep in mind that the first few ingredients are the most important, since they’re the biggest components of that food. “If you choose a cheese, and the first ingredient is not milk, but water or some weird-sounding chemical, then you know it’s heavily processed,” Rizzo explains.

That means if you want a healthier strawberry jam that’s not loaded with added sugar, the first ingredient should be strawberries, not high-fructose corn syrup. Look for foods that list all whole foods as their ingredients. If you see one sketchy ingredient at the end of the list it’s probably okay, though, says Rizzo. If an ingredient list includes three or four (or more) processed-sounding ingredients—or any of the first few ingredients are sketchy—leave that food on the shelf.

Many of us eat more sugar than we realize, which can lead to weight gain and contribute to poor cardiovascular health, according to the American Heart Association (AHA).

Not all sugar is created equal, though. “There’s sugar that is added to foods, which is essentially empty calories, and sugar that naturally occurs in nutritious foods, like milk and fruit,” says Karen Ansel, M.S., R.D. author of Healing Superfoods for Anti-aging: Stay Younger, Live Longer.

If your banana had a food label, the amount of sugar would probably freak you out for a second, but that’s all natural sugar, says Rizzo. That banana is a whole food and full of other nutritional perks, like potassium, fiber, and vitamin C. That oatmeal crème pie, though, is a different story. So 20 grams of sugar from a pastry isn’t nearly as worth your while as that much sugar from fruit.

Health experts will typically recommend that no more than 10 percent of your total calories come from sugar, but most people eat roughly 13 percent, according to Ansel. Men should consume a max of 36 grams of added sugar a day, while women should cap the sweet stuff at 25 grams, according to the AHA. So keep those daily maxes in mind when food shopping. You wouldn’t want to knock them all out in one sitting, right?

Though food labels don’t currently distinguish between natural and added sugars, they will have to call out added sugar when the FDA’s new label requirements fully kick in.

For now, your best bet is scanning the ingredients list for words like sucrose, maltose, and dextrose, along with more natural-sounding sweeteners like corn syrup, honey, and agave, says Ansel. You’d be surprised how many ‘healthy’ foods, like granola and yogurt, pack a ton of added sweeteners.

It’s just not realistic to obsess over added sugar in small amounts, so start by rolling back on sugary foods that contain little nutritional value, like soda, iced tea, lattes, desserts, candy, ice cream, and some refined cereals, suggests Ansel. That will leave more wiggle room for sugar in other picks that contain some added sugar but also provide nutrition, like a lightly-sweetened whole-grain cereal. “You may get a few grams of sugar, but you also get a serving of antioxidant and fiber-rich whole grains,” she says.

Fat gets a really bad rap, but if you’re still riding the low-fat bandwagon, please get off. Not eating enough fat can tank your energy levels and increase your risk for diabetes and heart disease. “Fat isn’t nearly as detrimental to our health as we once thought it was,” says Ansel. Some types of fat are more desirable than others, though. You’ll see four types of fat listed on your nutrition label: saturated, trans, polyunsaturated, and monounsaturated.

First up, the big bad fat to look out for: trans fat. Since identifying that trans fats (also known as ‘partially hydrogenated oils’) increases your bad cholesterol levels, which can spike your risk of heart disease, the FDA has been working to have them removed from packaged foods. They’re most often found in foods like cookies, pizza dough, and crackers, so you want to avoid them as much as possible. Ideally, your label should list zero grams of trans fat.

From there, look for foods that contain more unsaturated fats than saturated fats. According to the AHA, unsaturated fats are beneficial for your health and can lower your risk of heart disease and stroke. Walnuts, for example, are full of good-for-you polyunsaturated fats, like omega-3s, which can benefit your heart health, triglyceride levels, and even your mood, says Rizzo.

Related: 7 Fatty Foods That Are Good For Your Health

Meanwhile, research suggests that higher intake of saturated fat increases your risk for heart disease, according to the Harvard T.H. Chan School of Public Health. A good rule of thumb: Look for foods that contain a maximum of 10 percent of their calories from saturated fat, says Ansel.

This macronutrient gets hyped up for a reason: “We need protein to build muscle, manufacture antibodies and hormones, and repair tissues,” says Ansel. It also takes a long time to digest, so it keeps us feeling full and can help us eat less, she says.

Though many Americans get most of their protein at dinner, our bodies can make better use of it when we eat it consistently throughout the day. (Ansel recommends about 20 grams of protein per meal.) So check food labels for protein to make sure you’re incorporating it into your breakfast, lunch, and snacks, too.

If two cereals have a similar amount of calories and sugar, but one has significantly more protein, choose the protein-packed option, says Rizzo.

People have feared salt for decades, but we actually need to eat at least 500 milligrams a day to help our bodies hold on to fluid so we don’t dehydrate, Ansel explains. The issue? Most of us chow down on much more than that—about 3,400 milligrams per day, which is actually a third more than the maximum recommendation of 2,300 milligrams, she says. (The AHA recommends ideally limiting salt to 1,500 milligrams a day.) Over time, this can make you retain too much fluid and spike your blood pressure, which increases your risk of heart attack and stroke.

Since roughly 75 percent of the salt in our diets comes from packaged foods and foods from restaurants, checking your nutrition labels for sodium content can be helpful if you’re worried about overdoing it. Stay away from packaged foods that pack more than 500 milligrams of sodium per serving, says Ansel. “Foods to be on the lookout for are ramen noodles, canned soup, hot dogs, sausages, and some frozen dinners,” she says.

While salt isn’t typically an issue for the average healthy person, anyone with high blood pressure or who takes cholesterol meds should be especially careful about their salt intake and talk to their doc to make sure they’re in a healthy range.

Everyone loves carbs—but as with fats, the types of carbs you eat can make a big difference in your health.

So rather than obsessing about the amount of carbs a food packs, look at the source of those carbs instead. Check to see how many of a food’s total carbs come from its fiber content, Ansel recommends. Why? Fiber slows down your digestion, stabilizes your blood sugar levels, and can help you maintain a healthy weight. Pick packaged foods with two or three grams of fiber, minimum, says Ansel.

You also want to eat complex carbs, like whole grains and potatoes, which break down more slowly and give you energy for longer, instead of simple carbs, like cookies, soda, and crackers, which basically break down like sugar and tend to make you crash faster.

Look for packaged foods that have as much fiber (and as little sugar) as possible. And steer clear of brands that list enriched flour or the added sugars in the ingredients. Instead, look for terms like ‘whole-wheat’ and ‘whole-grain’ and other wholesome ingredients like oats, quinoa, amaranth, and barley, Rizzo adds.