It’s Monday morning at 7:30 a.m. I’m in the gym, lying on the floor underneath a barbell, and frankly, in total shock. Not in a good way, either.

Lying under this bar, trying to do eight reps of a floor press, I realize just how weak I really am.

I haven’t followed a consistent heavy strength-training plan before, but it’s not like I do nothing. I’m a health and fitness writer; it’s part of my job to work out. I’ve spent the last nine years putting my body through the paces, testing fitness class after class. Barre, spin, HIIT, yoga, boxing, CrossFit—you name it, I’ve tried it. Heck, I’m also a seasoned half-marathoner.

I truly thought the mish-mash of strength training I’ve done over the years had helped me build some might. But here I am, beneath this barbell, unable to press more than 45 pounds for eight reps.

Getting Serious About Strength

That moment was humbling, to say the least.

It’s also exactly why, after crossing the finish line for half-marathon number 14, I traded my running kicks for lifting shoes and committed to six weeks of powerlifting training at Platform Strength, a Denver-based strength and conditioning gym opened by Olympic lifting pro (and winner of MTV’s The Challenge Rivals II) Emily Schromm. The goal: build as much strength as possible.

Related: How Much Cardio Do You Really Need To Do?

My first meet-up with Emily was eye-opening. In order to make sure my body didn’t work too hard—and fail to recover fast enough—she said I had to give up almost all my cardio. This was crazy to me. I suggested running (at an easy pace!) the 2.3 miles from my house to the gym on lift days, continuing with my once-a-week run club, and tossing in a bike ride or hike on the weekends. I could tell that Emily, who was super-sweet, was trying to hold back laughter. “That’s way too much,” she said.

I had to ditch the run-to-gym idea—though she did say I could walk—and we settled on this schedule:

From there, I did an InBody analysis, which recorded every measurement I could possibly want, including weight, body fat, water composition, and muscle mass. It even measured the muscle in my right arm versus left arm, making it easy to spot imbalances. “It helps paint a much more accurate, holistic picture of what’s happening inside of your body,” Emily said. 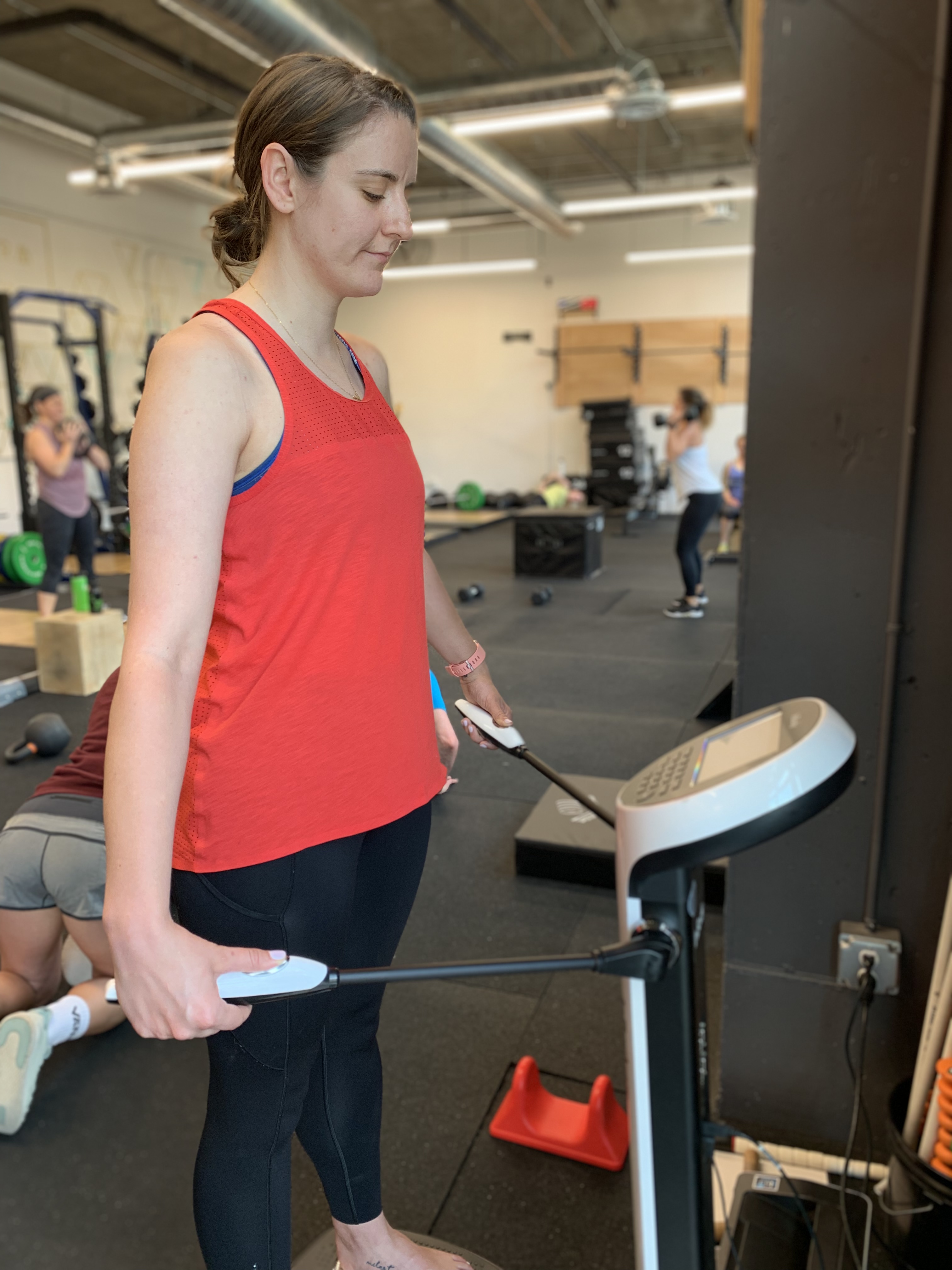 Emily, a nutritional therapy practitioner, also used the analysis to hone in on my nutritional needs. My main focus for strength-building: protein, protein, protein. Emily said I’d need about one gram of protein for every pound of muscle mass, plus healthy fats for satiety and some carbs (more on cardio days).

With that, I was off to the races—or, rather, the Olympic lifting platform. Over the next six weeks, I’d work closely with Platform Strength’s certified trainers and strength coaches, learn new lifts, stack on the weights, and get stronger in six weeks than I ever thought possible. Oh, and learn a ton about myself and my fitness.

Being A Beginner Is A Good Thing

A naturally athletic person, I’ve always thrived on quickly picking up new fitness activities and becoming a top performer. I expected lifting to be the same.

Each time I stepped up to the bar, though, I was humbled by how much of a powerlifting beginner I truly was. Regardless of the workout’s main lift (be it some back squat variation, deadlift, or bench press), or who worked out alongside me, I consistently threw around the lowest weight.

At first, this scared me. I didn’t want to be perceived as weak or have anyone question why I was there. I constantly felt myself wanting to make up excuses…“But I’m a runner! I bike! I’m good at other things, I swear!” 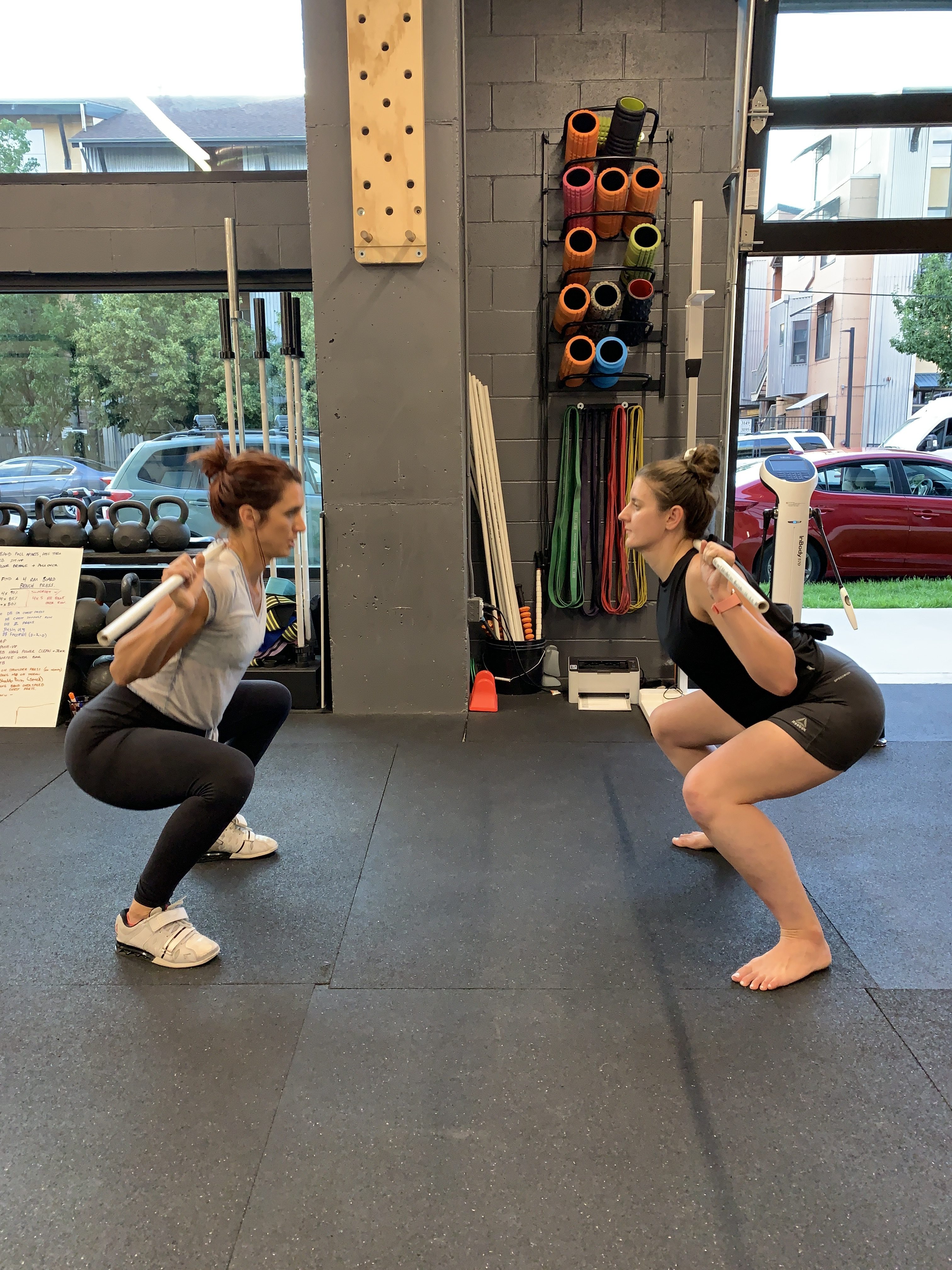 I resisted, though, realizing that part of this process, for me, was fighting off that mental insecurity. Whenever my lifting partner had to strip off weight for me, instead of diving into excuses I simply shrugged and said, “You gotta start somewhere, right?” Each time, I got an emphatic “yes!”—followed by their personal story of where they started from, and encouragement that I, too, would get stronger.

It was a refreshing perspective to take, albeit a hard one to put into practice over and over. But, truth is, you only get to be a beginner once. Choosing to embrace it—rather than shame myself over it—gave me the real opportunity to learn.

Related: Why All (Yes, ALL) Women Need To Strength Train

Sticking to lower weights (that still felt SO heavy to me) allowed me to really hone in on my form, nail the proper movement, and then add on weight. Had I been stuck in the ‘I gotta prove myself’ mindset, I likely would’ve bitten off more than I could chew, adopted bad form, and potentially have gotten injured.

It’s no secret that powerlifting, Olympic lifting, and just picking up weight in general can feel insanely intimidating. People fear getting injured, being judged, and simply not knowing what to do. A survey from FitRated backs this up: After talking to 1,000 people across the U.S., they found that nearly 53 percent of gym-goers felt like they’ve been judged for using equipment improperly, Meanwhile, 52 percent have felt nervous about not looking fit or avoided the gym altogether because of these (and other) insecurities.

Plus, there’s gym culture itself. When I walked into Platform for the first time, I had only been living in Denver for a few months and was hoping to make new friends. Would I fit in? I’d experienced other workout environments where I felt that if you weren’t a part of the crew already, you had no shot in hell of breaking in. You can imagine how experiencing that as a newbie to a sport can completely destroy your motivation.

Luckily, I came to appreciate the culture at Platform more than even the workouts themselves. Yes, I loved getting stronger and learning new exercises, but the community there kept me coming back for more.

Honestly, it reminded me of what I love about running. Sure, it can be a solo activity, but many runners prefer to log miles with a friend. In fact, companies like Ragnar Relay base their entire ethos on bringing like-minded people together through sport.

So, if you find you don’t fit in at your current gym, shop around until you find one that fits. It can be the make-or-break difference between achieving the gains you want or slumping into a stagnant routine.

Lifting Forces You To Slow Down

Note to, well, everybody: Powerlifting is not the same as HIIT. Rationally, this is something I knew—but for some reason, I thought that my myriad of fast, heart-pumping HIIT classes would translate well to the platform. And while they did help to a certain extent, I was constantly reminded of just how hard it is to perform a given move with an extra 50 to 100+ pounds strapped to your body.

The silver lining: Adding the extra weight forced me to slow down—and it was a nice change of pace. Instead of quickly performing as many reps as I could for 30 to 60 seconds, I learned to give my muscles time to recover so I could hit a one-, three-, or five-rep max. 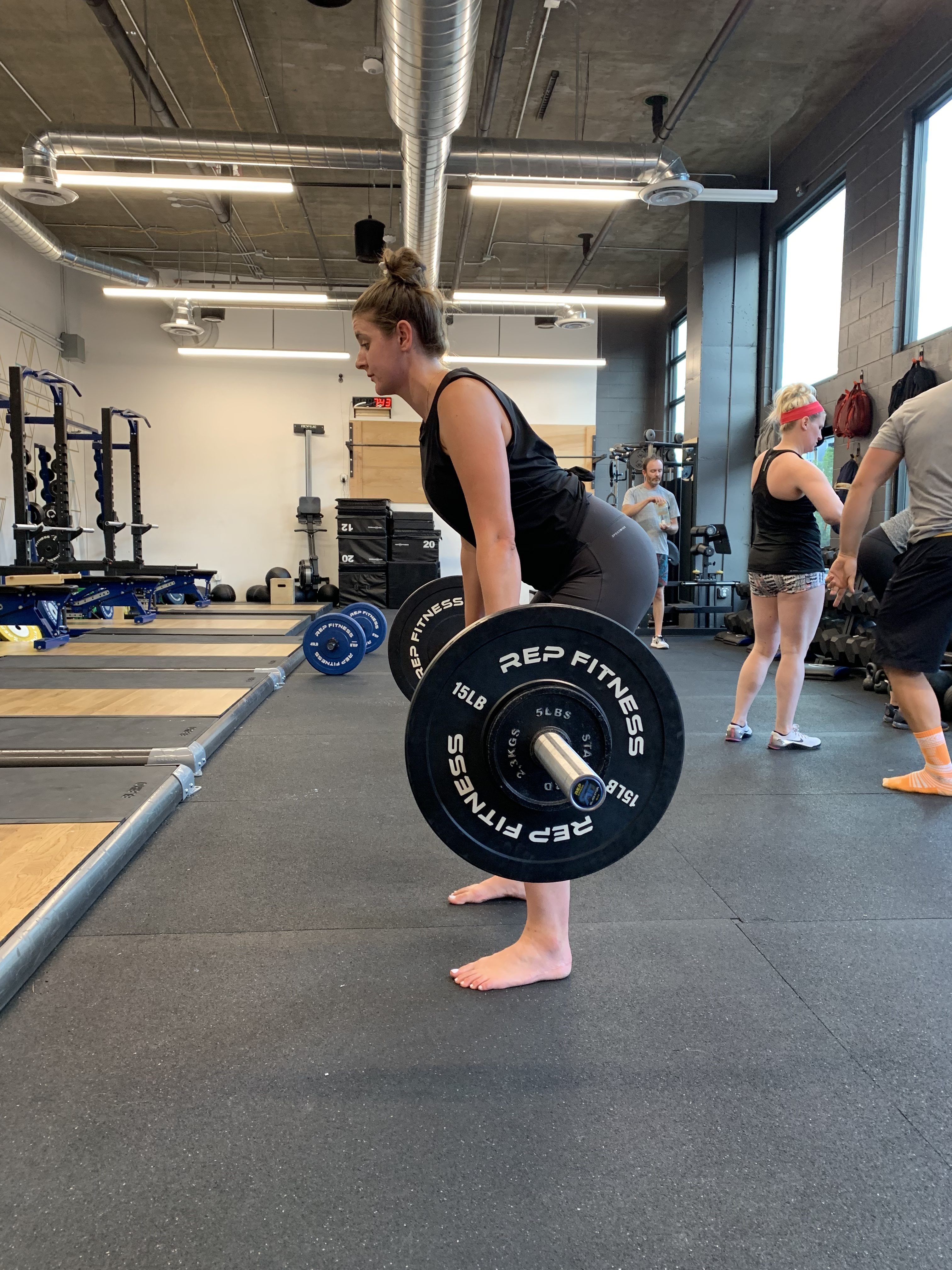 I’m not saying powerlifting is better than HIIT; just different. “When you’re doing any sort of anaerobic high-intensity interval training, you’re just picking a weight and moving through it,” Emily says. “You’re not even limited by your strength, but by the amount of oxygen your body is getting.”

Emily thinks the two can go together quite well, though. While HIIT is really great for insulin function and getting your heart rate up, it’s not necessarily about building muscle definition, she says. Powerlifting, on the other hand, is about changing your body composition, building muscle mass and reducing body fat.

Properly pair strength training and HIIT—along with a solid nutrition plan, of course— and you’ve got yourself a match made in workout heaven.

While yes, we should all strive to get as much of our nutrition as possible through whole foods, seeing notable muscle gains can be pretty tough to do with just food.

“Despite what is on your plate, you are not what you eat,” Emily says. “You are what you digest and absorb.”

Many people have digestive issues due to stress, which means we end up deficient in key vitamins and minerals, which are key for performance. That’s why Emily encouraged me to embrace supplements.

We started with the usual protein powder. I opted for a beef variety, which Emily suggested I might digest better than my usual vegan picks.

Related: How Much Protein Do You Really Need?

She also pushed me to add in branched-chain amino acids, or BCAAs, because I’m an early-morning exerciser and don’t like to eat beforehand.

“If you don’t have anything in your system when you wake up and work out, what is your body going to get fuel from? It tends to pull muscle, saying, ‘I’m going to turn this muscle back into glucose and use this glucose,’” Emily explains.

However, because BCAAs don’t have to go through the process of digestion, we can use them as an immediate source of fuel and energy, preserving our hard-earned muscle gains.

Sure, the placebo effect could have played a role here, but, after six weeks, I found myself sleeping better and lifting more than ever before. I’ll take it!

After six weeks of training—along with dialed-in nutrition—I lost over two percent body fat and gained about three pounds of muscle mass.

Oh, and my confidence? Through the roof.

That floor press I struggled with early on? Six weeks after barely completing eight reps at 45 pounds, I dominated those same reps at 60 pounds. My back squat one-rep max skyrocketed from 70 to 120 pounds. 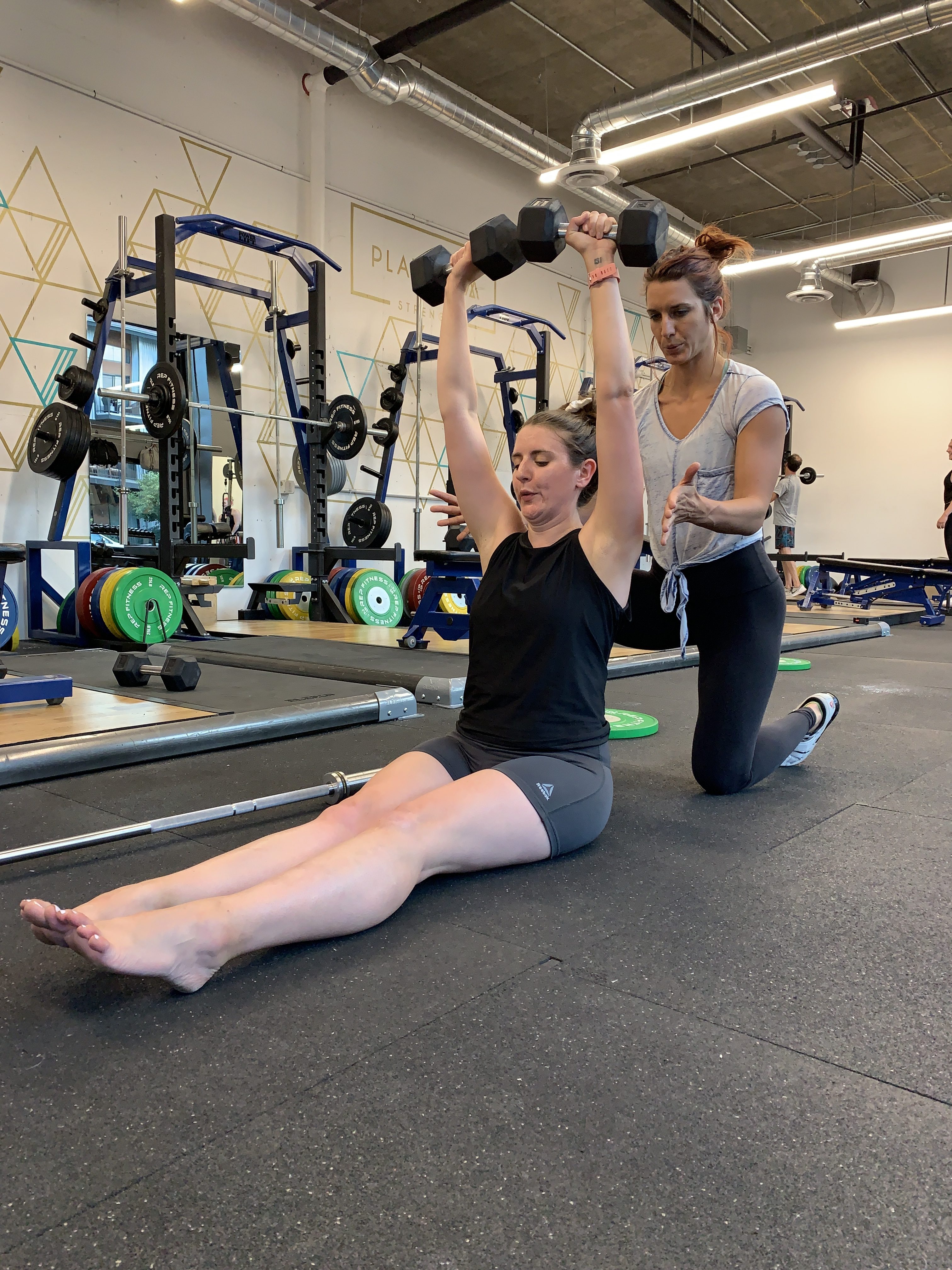 Though my running times initially slowed, I honestly credit that to my vast reduction of cardio. Plus, whenever I did run, it was usually on tired legs.

Since my powerlifting program ended, I’ve begun another cycle of half-marathon training. However, I’ve pledged not to ditch my strength-training goals.

For now, I’ll continue to dedicate two days a week to strength training—and throw in a smattering of short lifting sessions after running on other days.

Three weeks into this approach, I’ve continued to gain muscle and speed. In fact, I may have just found the perfect one-two punch for my physical and mental performance. I’ll never fear being weak again.