Just as our nutritional needs change as we age, so do the supplements we should prioritize. Guys, whether you’re post-grad, mid-career, or a retiree, here are the essentials to consider adding to your daily regimen.

When you’re young and balancing having the time of your life and, well, establishing your life, nutritional upkeep is key.

If You’re Only Going To Take One Supplement, Make It A Multivitamin

This probably comes as no surprise—but if there’s one supplement worth taking, it’s a multivitamin.

Even if you eat a ‘perfect’ diet, many factors—like stress, lack of sleep, and the way food is stored and transported—make getting all the nutrients you need from your diet tough, says  Jonathan Valdez, R.D.N., owner of Genki Nutrition, spokesperson for the New York State Academy of Nutrition and Dietetics. A multi can help you fill in any gaps.

For An Immune System Of Steel, Vitamin D

Your go-go-go lifestyle requires an immune system that’s in tip-top shape. If you feel like your body’s defenses can’t quite keep up, a lack of vitamin D could be to blame.

Research (like this review published in PLoS One) suggests vitamin D may affect the body’s response to infection, and that supplementation can bolster the immune system.

If you live north of Atlanta, you likely experience a notable drop in vitamin D during the winter months. Because of our indoor lifestyles these days, though, even those who live near the equator are at risk for deficiency, says Valdez. In fact, research suggests up to 40 percent of the U.S. population is deficient.

Balduzzi recommends starting with 1,000 IUs of vitamin D per day.

Note: Since our ability to produce vitamin D also decreases as we age, this is a supplement for your 20s and beyond.

“Protein is vital for the entire body,” says Valdez. “Not only does it provide the building blocks of muscle, hair, and skin, but it’s also essential for making enzymes, hormones, and antibodies for your immune system.”

Protein’s role in muscle growth is what makes it a primary concern for guys in their 20s, says Josh Axe, D.N.M., C.N.S., D.C., founder of Ancient Nutrition and DrAxe.com, and member of The Vitamin Shoppe Wellness Council. In combo with regular exercise, protein has been shown to support lean muscle mass. One review suggests that men who eat more protein while weight training develop larger, stronger muscles than those who don’t.

Research shows that we begin to lose up to three to five percent of our muscle mass per decade starting around age 30, so building as much of it as possible before then is crucial.

The government’s recommended daily value for protein is a low 0.8 grams per kilogram of body weight (just 72 grams a day for a 200-pound person), but many experts suggest eating more. In fact, to maintain or build muscle, the International Society of Sports and Medicine recommends eating 1.4 to 2.0 grams of protein per kilogram of body weight per day. (That’s 127 to 181 grams for a 200-pound person.)

Though it’s not a complete protein, you may also want to think about adding collagen protein to your routine. “Collagen protein is considered the most abundant protein in the body and can be found throughout the skin, muscles, tendons and joints,” says Axe. Collagen production begins to decline as early as our 20s and can eventually contribute to skin, joint, and even sexual function issues.

While most guys in their 30s may not be thinking about things like heart health just yet, these years are prime time for getting your ducks in a row.

“Omega-3 fatty acids—specifically EPA and DHA—have far-reaching effects on nearly every aspect of health, from brain function to heart health and beyond,” says Axe. In fact, these fatty acids have been shown to have an impact on everything from depression to hypertension to joint pain to ulcerative colitis to chronic diseases like heart disease. So yeah, you could say they’re important.

The issue is, the typical Western diet is low in omega-3 fatty acids and high in omega-6 fatty acids, and this imbalance contributes to inflammation,” Axe says. Research suggests very few Americans actually eat the recommended 250 to 500 milligrams of combined EPA and DHA per day.

That’s where a supplement comes in. Sears recommends starting with 250 grams of combined EPA and DHA per day in your 30s and increasing up to between 600 and 750 grams by the time you hit your 60s.

Boost Your Gut Health And Immune System With Probiotics

Mounting evidence suggests that maintaining and protecting your gut health can impact everything from digestive health to immunity to mental health to allergies. Research even suggests they play a role in maintaining a healthy bodyweight.

If you’re noticing changes on the scale and declines in muscle mass (which often set in sometimes in your 30s), these healthy bacteria may be able to help. Popping a gut-friendly probiotic may help your body absorb the vitamins and minerals it needs to keep your metabolism (and other systems) running smoothly, Axe adds.

Since there’s no universal daily recommendation for probiotic intake yet, consult with your doctor about the right supplement for you.

If you want to preemptively fight signs of aging and boost your energy levels, consider CoQ10. As you age, your body’s production of coenzyme Q10—a compound that plays a vital role in energy production—slows. Not to mention, cholesterol medications diminish production, says Ian Stern C.N.N., D.C., founder of Stern Chiropractic and Holistic Center in New York.

Thing is, high amounts of the enzyme are found only in rarely consumed foods (like chicken heart), says Valdez. You also won’t find it in most multis.

Stern recommends 100 to 200 milligrams per day.

By the time your 40s roll around, chances are hormone balance and early signs of aging become top-of-mind.

“Men, especially men 40 and older, should supplement with magnesium,” agrees Carolyn Dean, M.D., N.D., author of The Magnesium Miracle. (Highly active guys should consider adding it even earlier, since the physical stress of exercise depletes magnesium.)

The mineral magnesium has become a go-to supplement because it’s involved in over 300 reactions in our body. And for men having trouble with focus and stress during the day and sleep at night (which tend to worsen as we age), it’s a must. Research suggests that magnesium relaxes the nervous system, reduces stress, and supports quality sleep.

That’s why Balduzzi says it’s the one supplement he considers foundational for the hard-charging men of the 21st century. He suggests supplementing with 400 to 420 milligrams per day.

The trace mineral boron is found in foods such as raisins, prunes, almonds, and chickpeas. While it also supports healthy brain function and bone health, its claim to fame with men is prostate health. Studies suggest a link between higher dietary boron intake and lower risk of prostate cancer, explains Axe.

Axe recommends taking three milligrams of boron per day to look out for your prostate.

When you think calcium, chances are you think about bones. Since most people reach peak bone mass in their 30s, maintaining bone strength in the following decades is crucial, says Valdez.

According to the Office of Disease Prevention and Health Promotion, about half of Americans don’t get enough calcium through diet. If you don’t regularly consume calcium-rich foods like dairy or dark leafy greens, adding a calcium supplement to your routine can help you easily meet your needs, says Roussell.

Your 50s And Beyond

As middle age becomes real, you’ll want to ramp up your efforts to keep those sex hormones healthy.

Men in their late 40s and 50s may experience a rather unfortunate effect of aging: prostate issues. According to Stern, prostate problems are some of the most common health struggles older men face. They can cause urinary difficulties—such as increased frequency and trouble emptying the bladder—and even sexual problems.”

Long used in traditional medicines, the extract of the palmetto plant appears to improve urinary and reproductive issues, says Valdez.

For Time Spent Between The Sheets, Try Maca Root

Research suggests anywhere from 15 to 25 percent of men have experienced a lagging libido. Maca root, an herb known as an ‘adaptogen,’ is thought to help restore communication between the brain and adrenal glands by balancing the hypothalamic-pituitary-endocrine axis, which regulates brain and hormone function.

Ready to get your mojo back? One BMC Complementary & Alternative Medicine review, for example, found that the adaptogenic root improved sexual desire in both women and men after six weeks.

Plus, like other adaptogens, maca may boost physical and mental energy, reduce stress, calm nerves, and balance mood, helping the body to fight another serious libido killer—stress.

Since decreased sex drive could be a symptom of something more serious, talk with your doctor if you’re feeling off. Once you’ve got the green light, Axe recommends starting with 1,000 milligrams of maca root powder a day.

While testosterone begins to naturally decrease around 30, the decline becomes a concern for most men in middle age. In fact, research has shown that 20 percent of men 60 and older have below-normal testosterone levels.

Related: 5 Things You Can Do To Boost Your Testosterone

While many factors contribute to declining T levels, zinc deficiency may be a notable nutritional culprit. For example, one Biological Trace Element Research study found that middle-aged men with lower T levels tended to have lower zinc levels than men with healthy T levels.

How does zinc promote healthy testosterone levels? The mineral blocks aromatase, an enzyme that converts testosterone into estrogen.

“I always suggest a zinc or ZMA—a combo of zinc, magnesium, and vitamin B6—for supporting healthy testosterone levels in older men,” says Stern. Look for a supplement that contains eight to 11 milligrams of zinc. 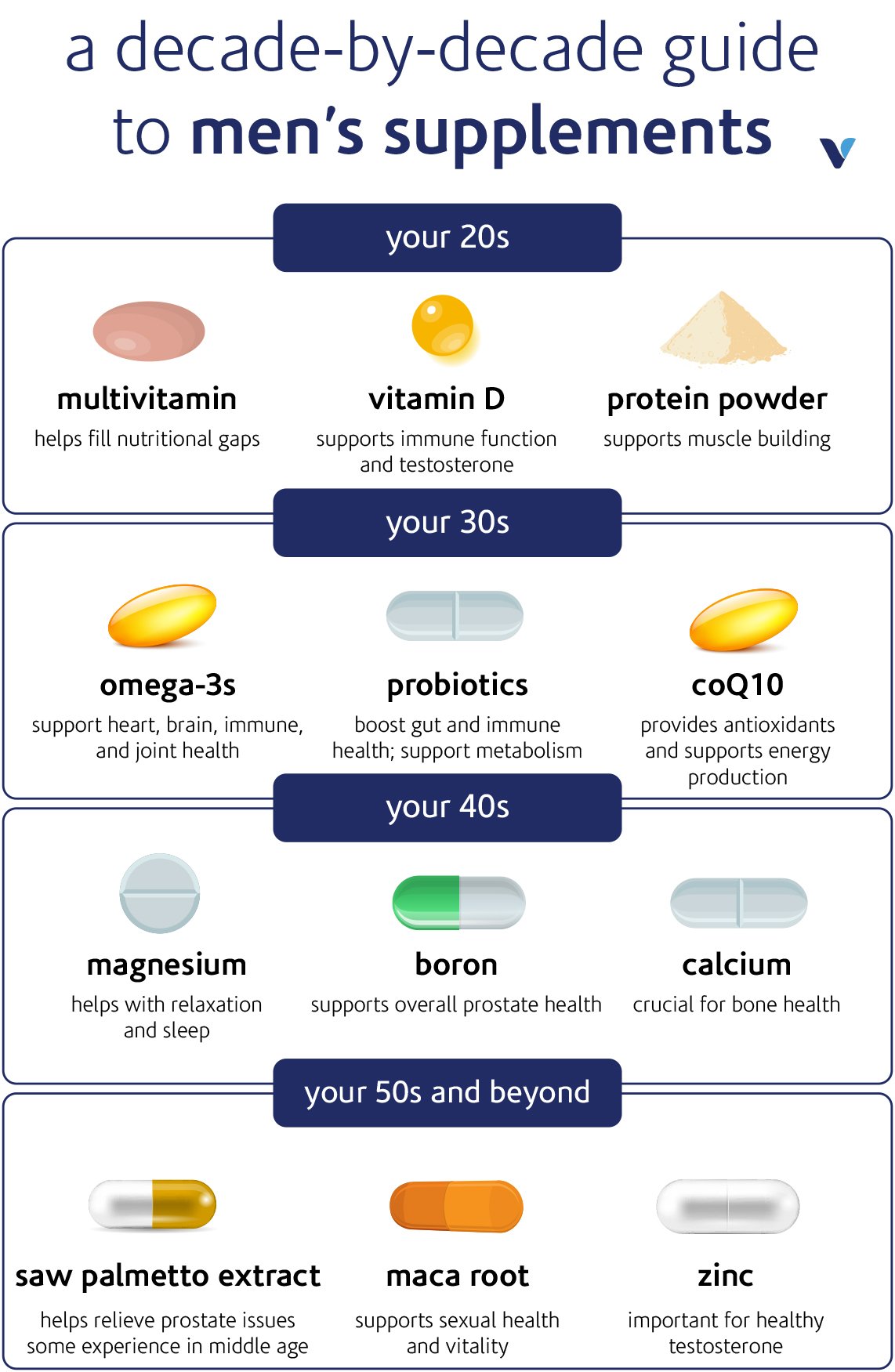