We’ve all heard about the health benefits of omega-3s EPA and DHA a hundred times over—but did you know there’s a third omega-3 that should be on your radar? Yep, it’s called DPA—and we’ve got the lowdown on what it is, how it differs from EPA and DHA, and why it matters for your health.

Omega-3s, a group of unsaturated fats we consume and produce from the food we eat, play a number of essential roles in our bodies and are crucial for our health.

Omega-3s have been shown to support:

When we talk about omega-3s, two in particular get the most attention: EPA and DHA. Why? EPA and DHA are the most abundant of these healthy fats. Because of this, they’ve got decades-worth of research backing up their benefits.

Given that, when we look to increase our omega-3 intake—especially with supplements—we tend to look at the concentration of EPA and DHA. However, they’re not the only omega-3s out there!

Recently a lesser-known omega-3, DPA, has stepped into the spotlight.

What’s The Deal With DPA?

Short for docosapentaenoic acid, DPA is the third most prevalent type of omega-3 fatty acid found in fish (the best source of omega-3s out there), after EPA and DHA, says Ginger Hultin, R.D. and Spokesperson for the Academy of Nutrition and Dietetics. (Note: It’s not a close third.)

Plus, research shows the body can store and convert DPA into both DHA and EPA as needed.

Like EPA, DPA has been touted for its cardiovascular and immune benefits. “Current studies link higher levels of DPA in the blood with lower triglycerides, ,” explains dietitian Maggie Michalczyk, R.D.

Case in point: “DPA was found in high amounts in the diet of Greenland Inuits, a population with exceptionally low incidence of cardiovascular disease,” she adds.

In addition, DPA has also been shown to have properties that protect our cognitive and mental health, Michalczyk says. Some studies have linked lower levels of DPA with mental health issues,. Plus, animal studies have suggested that DPA supports brain health and learning in older age.

Oh, and one more thing. DPA also happens to be a huge component of breast milk. This suggests that—alongside EPA and DHA—DPA plays a crucial role in fetal development. In fact, breast milk contains just about as much DPA as DHA—and even more DPA than EPA.

DPA In Your Diet

There’s no single consensus on how many omega-3s we should consume per day (even for EPA and DHA). In the meantime, The American Heart Association recommends eating two servings (3.5 ounces) of fish—which contains DPA—at least twice a week.

Like EPA and DHA, you’ll find DPA in cold-water fish such as:

You can also score some DPA in standard fish oil supplements. (In all, fish oil contains more than 40 types of fatty acids!) Thing is, most supplements contain just two percent DPA—and typically three to five times as much EPA and DHA.

The more recognition DPA gets, though, the more fish oil supplements have begun calling it out on their labels. Enzymedica Aqua Biome, for example, is specially formulated to contain higher amounts of DPA. It provides 100 milligrams of DPA, 400 milligrams of EPA, and 800 milligrams of DHA per serving.

Should You Load Up On DPA?

Once research (think large-scale human trials) on DPA has developed further, we’ll know more about who needs how much DPA per day.

Until then, try to eat the recommended two servings of fish per week, and consider taking a fish oil supplement that packs extra DPA, like Enzymedica Aqua Biome. 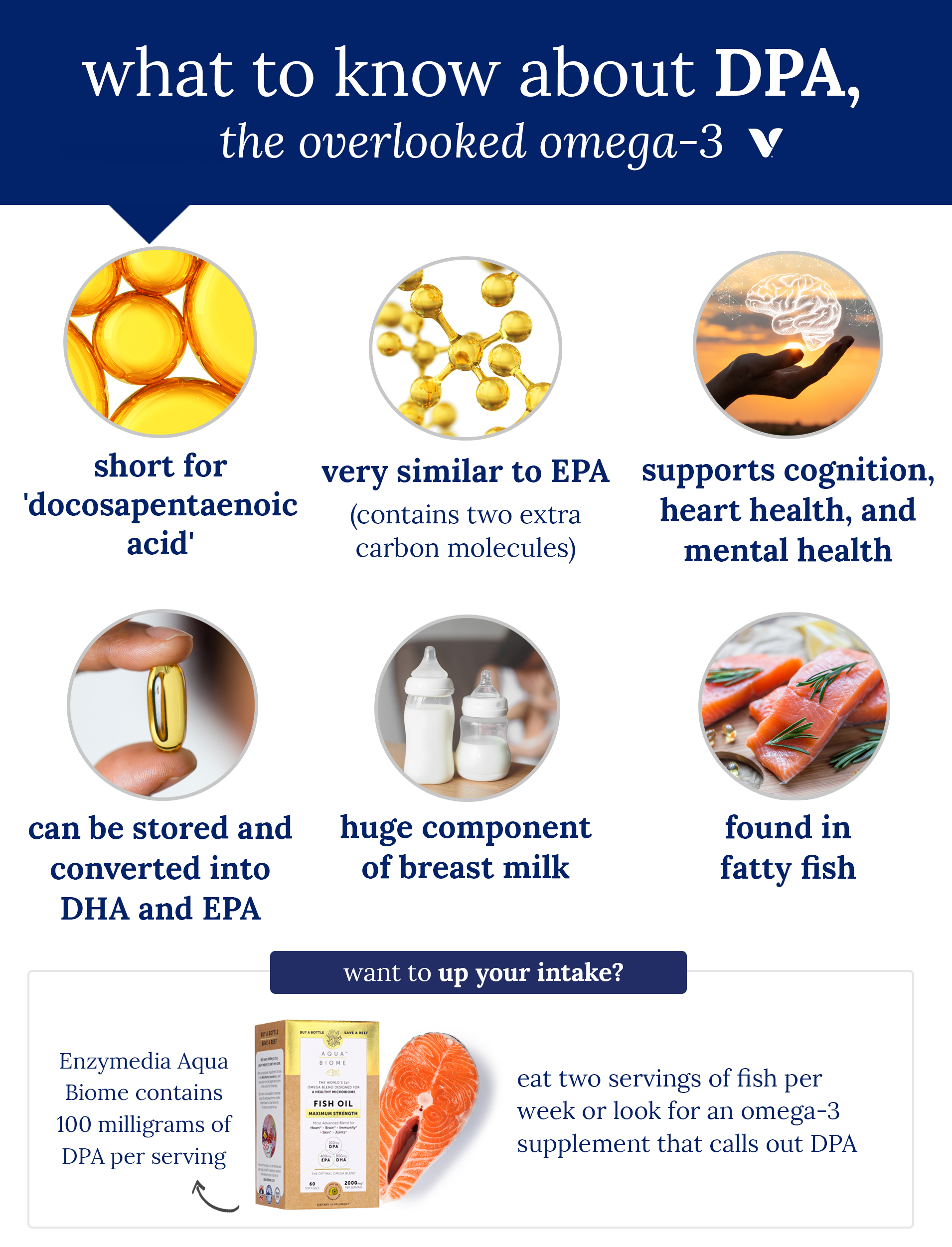