Though it mostly goes unnoticed, iron has a very important job: It carries oxygen through our bodies, which helps us produce energy and get rid of carbon dioxide. Like we said—IMPORTANT!

If you’re not getting enough iron or your body is struggling to absorb the iron you are already consuming, you could have iron-deficiency anemia. In the United States, 5.6 percent of the population are at least mildly anemic, according to the journal PLoS One. Additionally, an estimated 1.5 percent of Americans are moderately to severely anemic.

However, certain populations are more at risk for low iron than others, says Brittany Poulson, R.D.N. “People at higher risk of iron-deficiency anemia include women of childbearing age (due to blood loss during menstruation), infants and children, pregnant women, vegetarians (meat is a great source of dietary iron), and people who donate blood often,” she says.

Low iron levels can be caused by a wide variety of factors, including a lack of iron in your diet, an underlying health condition that makes it difficult for your body to absorb iron (like certain intestinal diseases), and pregnancy, according to Poulson.

The trouble is, many people aren’t aware that they aren’t getting enough iron—until they don’t quite feel like themselves. If you’re experiencing any of the following six symptoms, it’s worth a trip to your doctor to find out if you’ve got iron deficiency going on behind the scenes.

Feeling tired is one of the most common symptoms associated with low iron, according to dietitian Vanessa Rissetto, R.D.

It’s worth noting that fatigue is not the same as sleeplessness. With fatigue, you generally feel lethargic, both mentally and physically—like you have no energy at all.

If you’re not getting enough iron, you may also notice that you’re feeling weak, especially in your muscles, according to Rissetto. This could be due to a  lack of oxygen. When you don’t have enough red blood cells, you’re likely not transporting an adequate amount of oxygen to your cells, organs, and body parts. Accompanied by weakness, you may also notice you are feeling dizzy or lightheaded, according to Poulson.

Are you suddenly finding yourself skipping meals? This could be another sign that you’re not getting enough iron. “If there is decreased oxygenation to the stomach, it can make you feel less hungry,” says Rissetto. “Less action means less interest in food.” If your appetite has markedly changed, do speak with your medical care provider.

Yep, the physical appearance of our nails can indicate underlying health conditions. If you’re not getting enough iron, you could develop koilonychia, a condition caused by anemia that gives nails a thin, spoon-shaped appearance.

Some people are prone to having cold hands and feet because of their natural body temperature. However, if you’re experiencing it out of the blue, it could be one more clue you need more iron in your diet. This is also caused by the lack of oxygen moving throughout your body.

If you’re suddenly struck with a look of pallor, you may want to have your iron levels checked, according to Poulson. This isn’t the same as having a fair complexion, of course, which is dependent on the melanin in your skin. If your skin is looking lighter, or unusually less colorful (like your cheeks have lost their color, for example), talk to your doctor.

If you find you’re not getting enough iron, you should, first and foremost, focus on improving your diet. “Excellent sources of iron-rich foods include lean beef, liver, and dark chicken and turkey meat,” says Poulson. “Other sources include turkey, chicken, pork, fish, beans, peas, lentils, iron-enriched grains, spinach, collard greens, prunes and raisins.”

Pro tip: It’s beneficial to eat iron-rich foods (from plant sources) alongside foods that are high in vitamin C, since this essential vitamin aids our bodies in the absorption of iron.

If a change in diet is not enough, iron supplementation should be your next step. You may want to avoid consuming dairy, coffee, tea, chocolate, or high-fiber foods when taking iron supplements, as components of these foods may bind to the iron and reduce its absorption. Talk with your doctor about appropriate dosages before beginning supplementation. 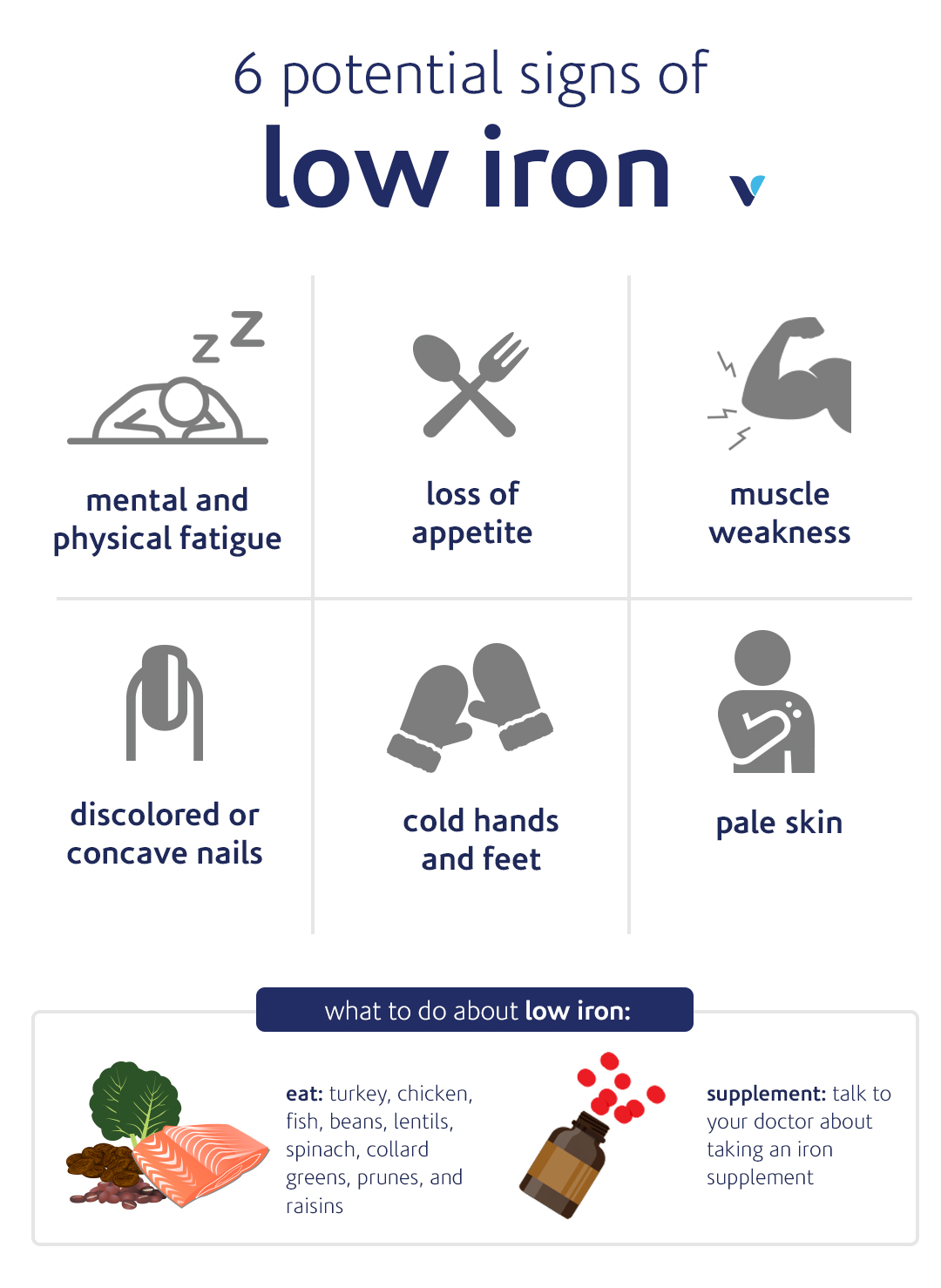 This is your cue to go check out the snack section