We all need a variety of nutrients to fuel our bodies and live our best lives, yet many of us regularly fall short on a number of those nutrients. Of particular concern in recent years: our lack of vitamin D.

According to a study published in The American Journal of Clinical Nutrition, vitamin D levels in Americans have declined significantly in the past few decades. It makes sense, considering how much time we spend indoors. Our skin converts the sun’s UVB rays into vitamin D, but most people’s office environments and daily commutes limit their direct exposure to that natural light. And even when we’re outside, we’re using sunscreen to protect our skin from damage. On top of that, few foods contain vitamin D and our ability to produce vitamin D declines as we age. Not an ideal slew of circumstances.

The vitamin D we produce when exposed to sunlight is technically a hormone, not a vitamin—but since we don’t get enough sun to produce what we need (and can’t fulfill our needs with food) it’s been added to many fortified foods and become a popular supplement, and is now known as a vitamin.

The D we produce or consume is first broken down in the liver and then again in the kidneys. From there, it optimizes calcium absorption to support healthy bones and regulates phosphorous, which is key for cellular function in just about every tissue in the body, making vitamin D important for muscle health, mood and well-being, memory, heart function, and more, explains Arti Lakhani, M.D., Director of Integrative Oncology at AMITA Health Cancer Institute in Illinois. Experts have also recently learned that immune cells have vitamin D receptors, indicating that the vitamin is also crucial for immune function. Not to mention, it’s been shown to support breast, prostate, and colon cell function, as well as the pancreas’ ability to produce insulin. All pretty important stuff.

A blood test is the only true gauge of a vitamin D deficiency, but there are a number of signs and symptoms that can indicate you’re running low.

1. You Get Sick All The Time

Feel like you’re coming down with different illnesses left and right? A vitamin D deficiency could be to blame. One All India Institute of Medical Sciences review of 12 observational studies found that children with lower levels of vitamin D had higher instances of lower respiratory tract infections.  The resulting theory: Vitamin D may affect the body’s response to infections.

Another review, published in PLoS One, meanwhile, found that supplementing with vitamin D could have an immunoprotective effect. After evaluating 11 studies, the researchers found that participants who supplemented with vitamin D had lower instances of respiratory tract infections than those who took a placebo, suggesting that vitamin D supplementation can bolster the immune system.

A never-ending energy slump may be another sign of a vitamin D deficiency. One case study published in Springer Plus, for example, followed a 61-year-old man who reported extreme fatigue during the day. After identifying that his blood levels of vitamin D categorized him as deficient, doctors prescribed the man with a daily supplement. In follow-up appointments three and 12 months later, he reported a significant improvement in energy. The case study authors hypothesized that because vitamin D impacts the immune system, it could influence the sleep-wake cycle, and suggested doctors consider screening patients with fatigue for vitamin D deficiency.

Related: 8 Possible Reasons Why You’re So Tired All The Time

3. Your Bone Density Is Declining

Vitamin D is necessary for calcium absorption, which is key for bone growth, density, and strength—and without ample vitamin D (and thus calcium), bones become brittle and weak. One study published the Journal of Midlife Health identified a strong connection between vitamin D deficiency and low bone mineral density (a measure of bone strength) in menopausal and postmenopausal women. More than 60 percent of the women studied were vitamin D deficient, and about 30 percent of those women had osteoporosis (a condition marked by significant loss of bone mineral density).

4. You Have Back Pain

Another bone-related consequence of low D? Back pain. One study published in the BMC Muscoskeletal Disorders found that menopausal women with vitamin D deficiencies reported back pain more frequently than those with normal levels. The 22 percent of participants who were vitamin D deficient reported more frequent and severe back pain, and more trouble completing daily tasks. The researchers suggest that, in addition to vitamin D deficiency’s impact on bone health, it may also be implicated in age-related muscle and strength loss called sarcopenia.

One of the most common symptoms of vitamin D deficiency is depression, says Levitan. After analyzing a number of observational studies and randomized trials, one review published in the Journal of Affective Disorders identified a correlation between vitamin D deficiency and increased risk of depression later in life. Other research suggests that since the brain contains tons of vitamin D receptors, not getting enough of the vitamin could affect its function, and thus, your mood.

6. Your Muscles Are Always Sore

Another unexpected sign you might have a vitamin D deficiency is muscle pain or weakness, says Arielle Levitan, M.D., co-founder of Vous Vitamins and author of The Vitamin Solution: Two Doctors Clear the Confusion About Vitamins and Your Health. One potential explanation for this: Our muscle cells contain receptors responsible for transporting calcium into muscle cells so that muscles can contract. “Vitamin D deficiency would decrease calcium—and other electrolytes—in muscle cells and thus cause dysfunction and weakness,” explains Lakhani. One European study found that those with low levels of vitamin D often report muscle pain and fatigue.

Last but not least, hair loss could be yet another sign of vitamin D deficiency, says Lakhani. While there’s not a ton of research in this area, one study published in Skin Pharmacology and Physiology identified a correlation between hair loss and low vitamin D levels in women. Of the 80 female participants, those experiencing the most severe hair loss also had the lowest levels of vitamin D and iron in their blood. Other research suggests this link traces back to the role vitamin D receptors play in hair follicle function.

How To Treat A Vitamin D Deficiency

Because vitamin D deficiencies are common, Levitan recommends having your levels tested every year. If a blood test confirms you are, in fact, vitamin D deficient, your doctor will recommend a supplement at the dosage that’s right for you. (The usual range is between 1,000 and 2,000 IU a day.)

Since your body stores vitamin D long-term, it is possible to go overboard with supplements, so make sure to consult with your doctor before adding them to your routine.

Pin this infographic to keep an eye out for signs of a deficiency: 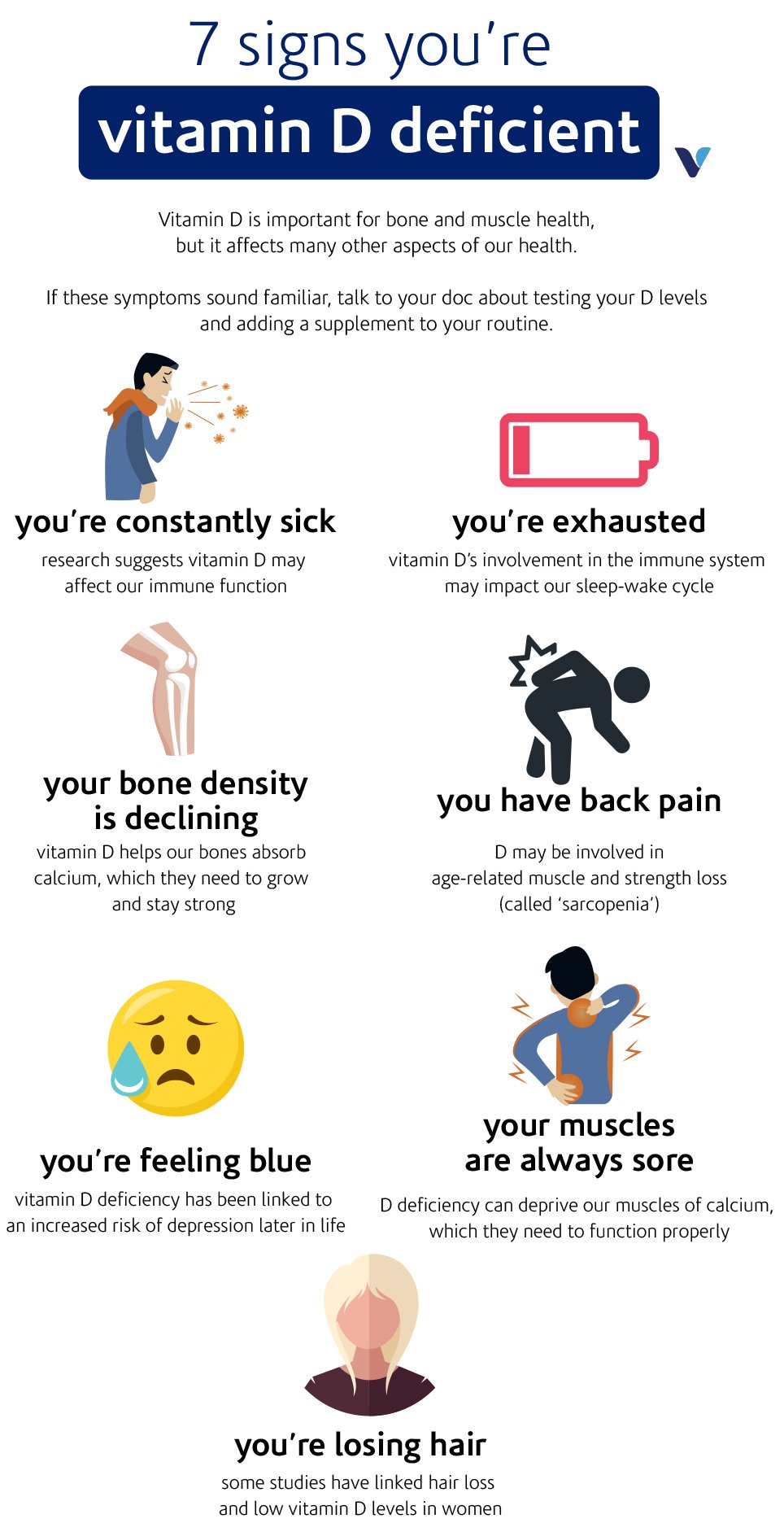